An additional 5,000 policemen were deployed this year to keep a check on crimes 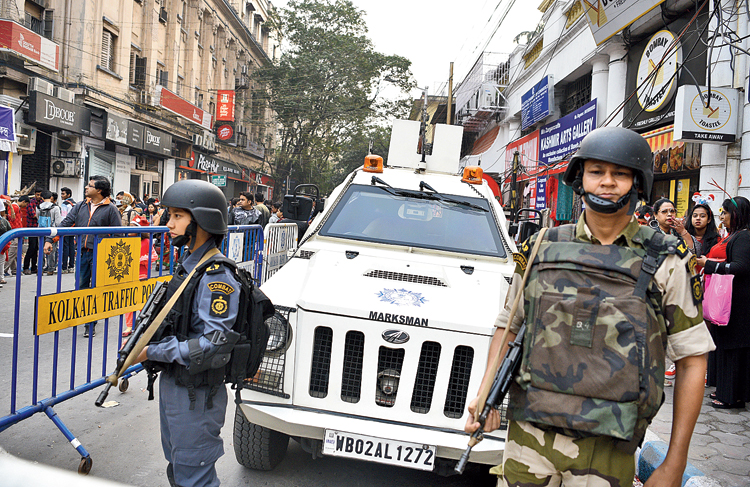 Disorderly conduct landed more than 500 people in police net between Christmas Eve and the afternoon of Christmas and 100 more for drink driving as women cops took charge of the city’s popular revelry spots along with their male counterparts.

The stretch of Park Street from JL Nehru Road to AJC Bose Road was divided into four sectors and five officers of the rank of deputy police commissioners of police were posted to keep check on crimes. Members of the Combat Force and Winners, special patrol teams of Calcutta police, were on duty as thousands trooped in to soak in the Yuletide spirit.

Eleven watch towers, five of them on Park Street, were set up across the city’s party zones. Members of Quick Response Team, armed with night binoculars, were posted to ensure continuous surveillance till early on December 26.

“Over 200 persons were arrested for carrying three persons on two-wheelers since Christmas Eve,” a senior police officer at Lalbazar said.

Police in plain clothes were posted at nightclubs and small teams of officers from the detective department merged with the crowd to identify and arrest history-sheeters.

An additional 5,000 policemen were deployed this year to keep a check on crimes across parts of the Maidan, Esplanade, Park Street and Rabindra Sadan.

“The Winners team was asked to make rounds of Park Street and its adjoining areas on two-wheelers. These women officers have been specially trained to deal with those trying to disturb women in the crowd,” the officer said.

At least 265 motorists were prosecuted for drink driving, riding two-wheelers without helmets in areas falling under the Bidhannagar commissionerate between Tuesday and Wednesday.

The Bidhannagar police commissionerate introduced a WhatsApp number , 7044222333, to receive complaints. “If anyone needs police assistance or wants to report anything they can either call the number or send photographs of the perpetrators,” said Kunal Agarwal, deputy commissioner, headquarters, Bidhannagar commissionerate.