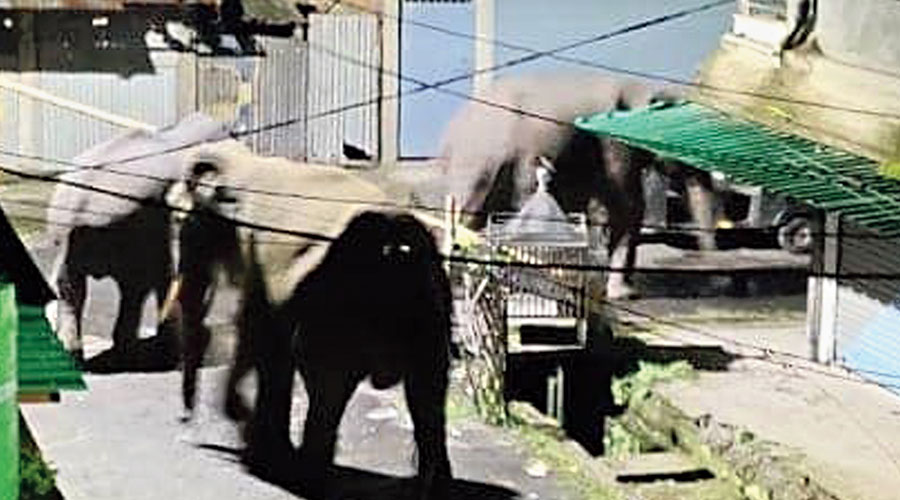 Three wild elephants ambled into Siliguri from neighbouring Baikunthapur forest around 2am on Wednesday, strolled through some of the areas in the city and left for their habitat a couple of hours later.

Foresters had to rush to the areas to keep watch on a full-grown tusker and two sub-adult elephants that went through containment zones and chomped on banana plants and jackfruits in a garden.

Around 4am, the elephants started for the Sarugara forest range, leaving without causing any major damage.

A forester said the elephants took the Eastern Bypass, roamed in wards 37 and 38, and again took the bypass while leaving. “They wandered about in Fapri and Telipara in the Eastern Bypass area, reached Baneswar More and moved through Madhya Chayanpara and adjacent areas of Ashighar More in the northeast parts of the city,” he said.
The animals also moved through Raja Ram Mohan Roy Road of East Vivekanandapally and Swamiji More in Hakimpara, he added.

Foresters and policemen followed the elephants on vehicles at a distance so as not to alarm the animals.

A resident of Madhya Chayanpara said they were asleep, given the time.

“But street dogs were barking strangely, which woke us up. So, we went to our balconies and porticos, only to spot elephants walking noiselessly in our lane. We were startled,” said Bapi Ghosh of Madhya Chayanpara.