Barrackpore’s TMC nominee Raj Chakraborty’s leg was hurt during stone-pelting by the mob, while Subhranshu Roy’s car was allegedly vandalised by TMC supporters 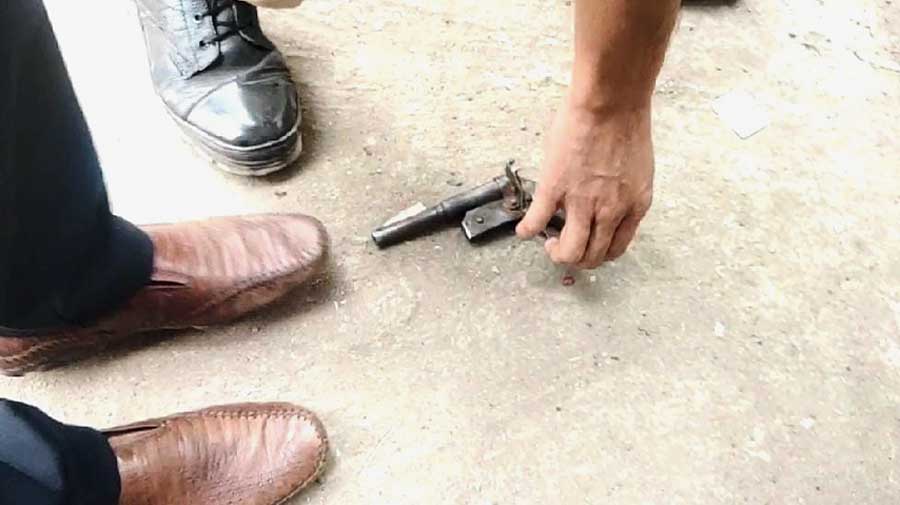 A gun on the site of the clash in front of the administrative building in Barrackpore on Wednesday.
Tapash Karmakar
Subhasish Chaudhuri   |   Barrackpore   |   Published 01.04.21, 01:38 AM

A Trinamul supporter suffered a bullet wound and 27 others from his party and the BJP were injured during a clash in front of the subdivisional administrative office here on Wednesday afternoon.

Police had to lathicharge the Trinamul and BJP supporters who came for the filing of nomination papers by Trinamul’s Barrackpore nominee Raj Chakraborty and BJP’s Bijpur nominee Subhranshu Roy — at the SDO office.

Trinamul supporter Siraj Ali, who got a bullet on his leg, was admitted to the BN Bose subdivisional hospital along with a dozen others. Chakraborty’s leg was hurt during stone-pelting by the mob. Roy’s car was allegedly vandalised by Trinamul supporters.

Police sources said a country-made pistol was recovered from the spot from which at least three rounds were fired, but the Barrackpore police commissionerate refused to confirm firing. So far, police have arrested six persons, including four BJP activists, on attempt-to-murder charges. The Election Commission has sought a report from North 24-Parganas district administration.

Police and local sources said trouble started at 3pm when Trinamul’s candidate Chakraborty was leading a rally after filing his nomination papers and BJP candidate Roy was entering the administrative building to submit his papers.

Chakraborty claimed theirs was a peaceful rally till BJP supporters attacked them. “BJP supporters began pelting stones and opened fire. It was a planned attack as the BJP is fast losing ground here. All these happened in front of the police who were mute,” he added. Trinamul’s Naihati nominee Partha Bhowmik also blamed Roy and his men.

Roy refuted Trinamul’s allegations. “Everyone knows who organised the attack. One of its candidates who did not want me to submit my nomination organised this attack. I was the target and they wanted to kill me today,” Roy alleged. “They first tried to prevent me (from filing papers), but somehow the police took me away. When I was coming out of the administrative building, I heard Trinamul supporters’ abusive slogans against me,” Roy said.

He alleged that despite the situation going out of control, the police remained silent and kept the central force inactive. “It remains a mystery why jawans of the central force were made to wait despite Trinamul goons going on a rampage,” Roy said.