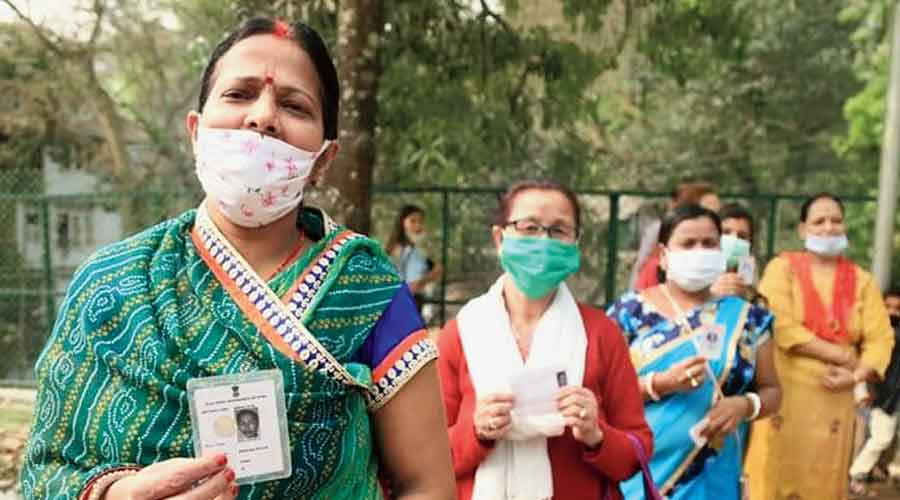 A strikingly poor turnout of Hindi-speaking voters in three of the seven seats — Jorasanko, Maniktala and Shyampukur — in Calcutta on Thursday raised an alarm in the state BJP, said a senior office-bearer of the party.

Hindi-speaking population is considered the traditional vote bank of the BJP which had been claiming it would sweep most seats in Calcutta.

According to the Election Commission of India, the seven seats recorded 57.53 per cent turnout till 5pm.

“We weren’t prepared for this. The fear of contracting the novel coronavirus has prevented these people from coming out to vote. The party depends massively on the Marwari and Bihari communities in these areas. We were hopeful of bagging a chunk of the votes of these communities, but their turnout has been unexpectedly low,” a BJP worker in the Jorasanko constituency and a Marwari himself said.

The Telegraph visited several booths in Jorasanko, Maniktala and Shyampukur, especially the ones located in areas with considerable Hindi-speaking population, and witnessed low turnouts.

Although the BJP has never won Jorasanko seat, certain pockets of this segment are traditional BJP strongholds. “This isn’t a municipal election. To secure the seat, we need the participation of the entire community which spreads across Burrabazar and Posta. To my opinion, that wasn’t satisfactory,” the source said.

The turnout was so poor at a makeshift polling station near Kalakar Street in Burrabazar under Jorasanko constituency that an ITBP jawan on election duty started joking about it. “There are three booths here. Number of agents sitting inside the booths is five times the number of voters going inside to exercise their franchise,” the jawan told this correspondent.

Another central force jawan joined the conversation and said he had witnessed the lowest turnout at the particular booth near Kalakar Street during the current Assembly polls. “We were posted in another part of Calcutta during the seventh phase. Even there, the number of voters were more,” the second jawan said.

A few kilometers away, the Shree Maidh Kshatriya Sabha Bhawan on Kali Krishna Tagore Street wore an equally deserted look all day. This community hall housed two booths and leaders said they were attending to a maximum of five voters in an hour.

A Hindi-speaking family — two male members and a young woman — arrived around 12.30pm to exercise their franchise at the Purwachal Vidyamandir under Maniktala constituency. Each of them had their masks on and the woman was wearing gloves also. Neither did the family want to be photographed nor did they reveal their names. But they said they had come to vote only after thorough deliberation in the family.

“I’ve come with my father and brother,” the young woman said.

Later, a BSF jawan deputed at this polling station accompanied this correspondent to the five booths inside. No voter could be sighted at three booths. The polling station is located near Kankurgachhi, which has substantial Marwari population.

State BJP’s chief spokesperson Samik Bhattacharya, however, said irrespective of the low voter turnout, the party would win those three seats. “In 2016, Jorasanko had witnessed a turnout of 45 per cent. This time, it is more by at least by 15 per cent. The margin might be lesser than other seats but the BJP will win Jorasanko, Maniktala and Shyampukur.”