Bengal elections 2021: Glare on role of BJP ‘outsiders’ in defeat 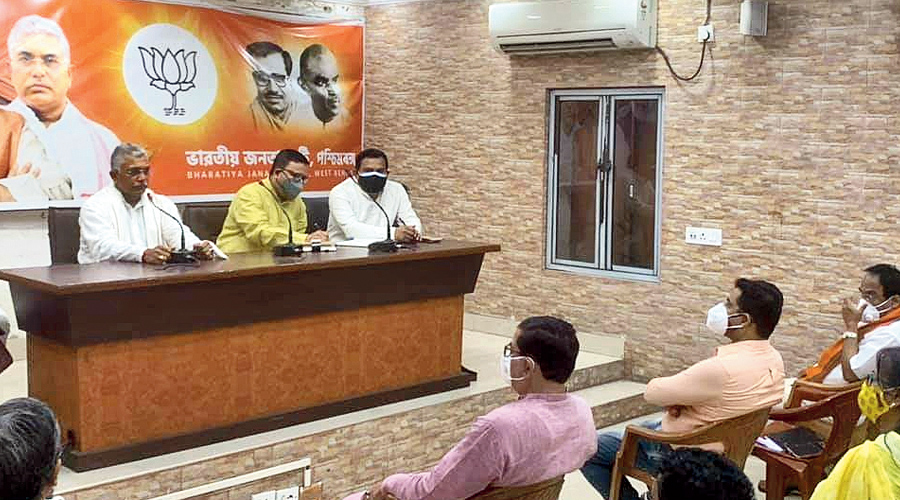 Bengal BJP chief Dilip Ghosh on Friday told his colleagues that he had asked national leaders to leave for Delhi and the local unit would be able to manage on its own, multiple sources in the party said.

“While addressing us, Dilipda said he was asked by the central leaders if they should stay or leave. He said he had told them to leave if they wanted to and the state unit could take care of the party’s affairs in Bengal,” a state committee member of the BJP said.

Ghosh’s comments were received with applause by members of the state committee present at the organisational meeting. For them, it was a delayed vindication of the grudge they had against the central leaders whom they held responsible for the BJP’s electoral drubbing in Bengal.

A section of the Bengal unit believes the Midnapore MP’s remarks suggested that the national leaders had failed to identify themselves with the culture of Bengal, an issue Mamata had flagged multiple times in the past six months.

“Mamatadi is our rival and we had refuted her ‘outsider’ narrative during our campaign. It now turns out that she was right when she said the bohiragawto leaders wouldn’t understand Bengal. Dilipda will of course not say so in these many words, but what he said at the meeting today suggests the same thing,” a source present at the meeting said.

The source said Ghosh had made it clear to the central leaders that the state unit was equipped to take care of the party’s internal and legislative matter as well as the violence against the workers.

A large section of the BJP has held the central leadership’s unnecessary intervention responsible for the poll debacle. They believe the national leaders whom BJP parachuted during the poll campaign failed to identify themselves with Bengal and also made multiple wrong decisions like the selection of unfit candidates which finally led to their defeat.

Asked whether he had made any such statement, Ghosh didn’t elaborate but said: “There hasn’t been a discussion as such. I’ve told them samley nebo (we will manage). We will go to districts to speak to the workers.”

BJP sources said it was important that the state leadership took things in their own hands and started visiting the families affected by the post-poll violence. Workers at the grassroots are fuming against senior party leaders and candidates who were fielded from outside.

The workers said the leaders had left them to fend for themselves in the face of alleged attacks by Trinamul goons following the BJP’s debacle. The BJP leadership has promised to provide financial compensation to those who have lost their property in the post-poll violence.

Many BJP workers, who were either deputed as polling agents or as the party’s ‘karyakartas’ across Bengal, accused the candidates and party leaders of not even taking their calls during the crisis.

A Mahila Morcha member in Bolpur, whose house was attacked on May 2 night, said the leaders, including Birbhum district president Dhruba Saha and the candidate from Bolpur, Anirban Ganguly, left them to face the violence and did not communicate further even after repeated calls.

“I will never hold a BJP flag in future as I saw the leaders who provoked us to campaign left us alone on the ground after the defeat. The candidate, Anirban Ganguly, had left Bolpur on May 2 evening even without informing us. Before the polls, all leaders were asking us to bring people to the meetings and they vanished immediately after defeat,” said the 33-year-old woman, who did not want to be identified.

According to the woman, on May 2 night, a group of Trinamul workers armed with iron rods and bamboo sticks reached her doorstep and ransacked a part of her house when she was sleeping along with her six-year-old son.

After the threat and the ransack, she informed police who came and gave her protection from further attacks.

“We attacked state police during our campaign but they came and secured me from the further attack. I hate to say that neither the BJP district president nor our candidate came to save me or were available over phone,” she said.

Saha said the candidates could not take calls as violent incidents were uncountable.

“I was very ill from the evening of the poll result and the candidates could not take calls as there were hundreds of complaints. We are trying to be with them but we are few in numbers in the district now,” said Saha. Ganguly, however, did not take calls from this newspaper.

Not only in Bolpur but the allegations against outsider candidates like Swapan Dasgupta emerged in areas like Hooghly. Apart from many grassroots workers, several senior BJP leaders accused Dasgupta, who lost the Tarakeswar seat, of leaving the workers at the mercy of “Trinamul goons”.

“Our participation in Dasgupta’s election campaign earned us the wrath of Trinamul. Dasgupta did not care to stand by BJP workers when they were facing attacks. We alerted our senior party leaders and requested them never to field outsiders like Dasgupta as they will not be with us,” said Ganesh Chakraborty, a BJP vice-president in Hooghly.

Sensing the anger of party workers, the BJP leadership has promised to provide compensation to those whose homes have been vandalised. BJP district presidents have been asked to prepare a list and work out a possible compensation that the party will need to pay its workers. The list has to be sent to the state committee within a week.

“The party has decided to stand by the affected workers financially and medically. Whatever we can, we will support our workers. This is our only programme for the coming few days,” said Samik Bhattacharya, the chief spokesperson for the party in Bengal.

Trinamul workers allegedly gheraoed the BDO office Dhaniakhali in Hooghly while a meeting between BJP MP Locket Chatterjee and the BDO was on. Chatterjee also complained of bomb blasts near the BDO office. She later called the district magistrate, who sent the police to rescue her.