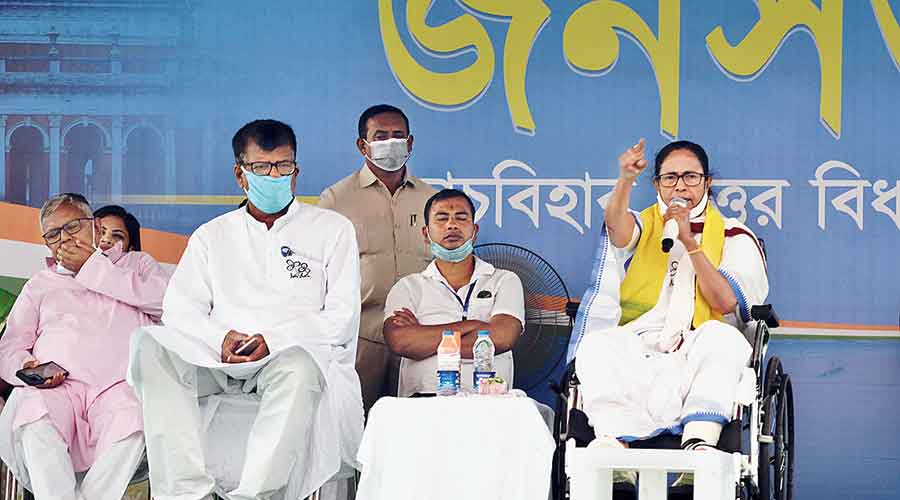 Mamata Banerjee on Wednesday “advised” the women voters, particularly those living in rural belts, to “gherao” central armed police force (CAPF) personnel if they created any problem during the poll process.

The Trinamul supremo, who closed her final leg of campaign in Cooch Behar, came up with the “advice” while speaking at a public meeting in Baneswar under the Cooch Behar North Assembly seat.

The north Bengal district would go to the polls on April 10,

“If the CRPF tries to create any trouble, I urge the women in rural areas to gherao them... . Some of you should confine them while others will go to vote… You should repeat it to prevent them from intimidating voters,” Mamata said.

Since the beginning of the eight-phase polls in Bengal, the chief minister and Trinamul leaders have time and again slammed the central forces and accused Union home minister Amit Shah of using the CAPF to influence the voters in favour of the BJP..

“At villages….don’t feel intimidated. If they try to create any trouble, talk to them… talking to them, at times, means confinement. You should take steps as per the situation. Also, the BJP is spreading lies that prohibitory orders have been enforced across the district. It is incorrect. Such orders are in force only till 200 metres of a booth. This propaganda is being made to discourage people from coming out in groups to cast their votes,” said Mamata.

After advising people on how to deal with the central forces, she urged the CRPF and the police to act impartially during the fourth phase of election and tossed questions at the Election Commission while mentioning that 10 people had died during the past few days.

“There are complaints that even girls have been molested….if any such thing happens or a candidate is attacked, you have to act,” she told the audience.

In course of her speech, Mamata also sounded agitated with a section of the state police and referred to the assault on Trinamul candidate Sujata Mondal who was attacked in Arambagh of Hooghly on Tuesday during the third phase polls.

“During the elections, even the (state) police become BJP (supporters). I have seen it in a number of places… it is not the fault of policemen who are in lower ranks…. Some senior people indulge in such bias…. There are reports that these days, many of them have got into an understanding (with the BJP)… I have seen what happened in Arambagh yesterday and also the role of the officer-in-charge of the local police station… We are keeping a note of everything…” said Mamata.

Political observers pointed out that so far, it was the CAPF that had been facing the verbal arsenal from Mamata and her party.

“But now, she is equally critical of a section of the state police and has even instructed her party workers not to believe the police and guard the EVM during the after the elections. This is significant,” said an observer.

Mamata’s remarks have also made the saffron brigade react. On Wednesday, a BJP delegation led by party leader Sisir Bajoria went to meet the CEO and lodged a complaint against Mamata Banerjee’s comments on the CRPF.

The delegation has requested the CEO to “censor” the chief minister.

“Can a chief minister say this? She gave step by step instructions on how to stop the central forces. We have told the election commission that they’ve given a strong reply to Mamata Banerjee’s letter to them, but our caretaker chief minister doesn’t probably care about all that. Thus, she needs to be “silenced,” “censored,” Bajoria said.

The delegation also complained about the attack on party’s Uluberia South candidate Papia Adhikari on Tuesday during the polls, said sources.