'Central force jawan grabbed me by my neck and hit me with his stick,' says Mrinal Haque 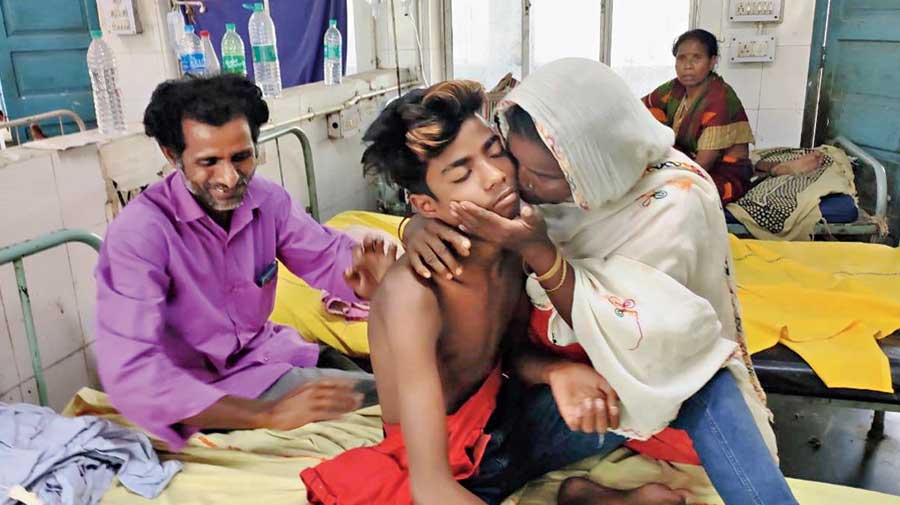 Mrinal Haque writhed in his hospital bed, complaining to his mother.

“Khub byatha korchhe amma (It’s hurting bad, mother),” the Class VIII student told Rahila Bibi, who has been at the hospital in Mathabhanga with husband Majid Mian since their son was admitted on Saturday afternoon.

The 15-year-old boy is central to the narratives swirling around the Sitalkuchi tragedy in which four voters were gunned down by central forces on Saturday.

The teenager’s name has travelled beyond Jorpatki village, courtesy a report on the firing that the administration has submitted to the Election Commission.

The report sent by Vivek Dube, the special police observer deputed to Bengal by the Election Commission, to Nirvachan Sadan says the boy had fallen sick near a polling booth and some women were found taking care of him.

When a group of CISF personnel approached them to ask whether they wanted to send him to hospital in a vehicle parked nearby, some onlookers mistakenly thought the jawans had beaten the boy and raised an outcry, the report says. This prompted 300 to 350 villagers to gather near the booth, it adds.

The situation escalated thereafter, culminating in the fatal shootings.

Records at the hospital, 10km from Mrinal’s home in Jorpatki, show that the boy had arrived with severe body ache and blunt injury marks in his buttocks, back and shoulder.

Asked how he had suffered the injuries, Mrinal said in a weak voice on Sunday: “I was in the local market (in Jorpatki on Saturday morning) when a central force jawan grabbed me by the neck and hit me several times with his stick. I pleaded with him but he kept beating me. After some time, he stopped and I fell to the ground.”

Several villagers had told this correspondent the unprovoked thrashing of Mrinal had prompted them to protest the central forces’ high-handedness, which led to the firing that killed the four voters in Jorpatki, part of Sitalkuchi constituency in Cooch Behar district.

Rahila said she was told that after Mrinal slumped to the ground, a few people gave him first aid and water.

“We got the news and hurried to the spot. Soon, a police team arrived and offered to take him to hospital. Seeing his condition, we agreed and headed for the Mathabhanga sub-divisional hospital,” she said.

It’s the only hospital serving the 3 lakh people of Cooch Behar's Mathabhanga sub-division, located along the India-Bangladesh border.

Mrinal’s parents could not vote as they had to attend to their son.

The parents said they could not have imagined that a jawan’s assault on the boy would set off such a spontaneous protest.

The parents added that Mrinal had told them he had no idea why the jawan beat him.

“Our house is about 70 metres from the Amtali Madhyamik Siksha Kendra (where the CISF had fired near the 5/126 booth) and adjacent to a local mosque,” father Majid, a farmer, said.

“He was nowhere near the booth; he was in the local market, which is around 350 metres from the booth. We can’t understand why the forces beat him up.”

Mrinal’s condition has shown no improvement and the doctors have advised a shift to the MJN Government Medical College and Hospital in Cooch Behar town, about 40km away.
But the parents say they haven’t got the money to hire an ambulance.

“We are already short of cash for his treatment --- we had brought along whatever little we had but it’s not enough,” Majid said. “I’m trying to get in touch with relatives and neighbours but they are busy with the last rites of the four youths we lost yesterday.”

Voters were shot in chest and neck: Mamata