It said a warning is sent to Bengal’s irrigation department if it releases more than 23,000 cusec water from its dams 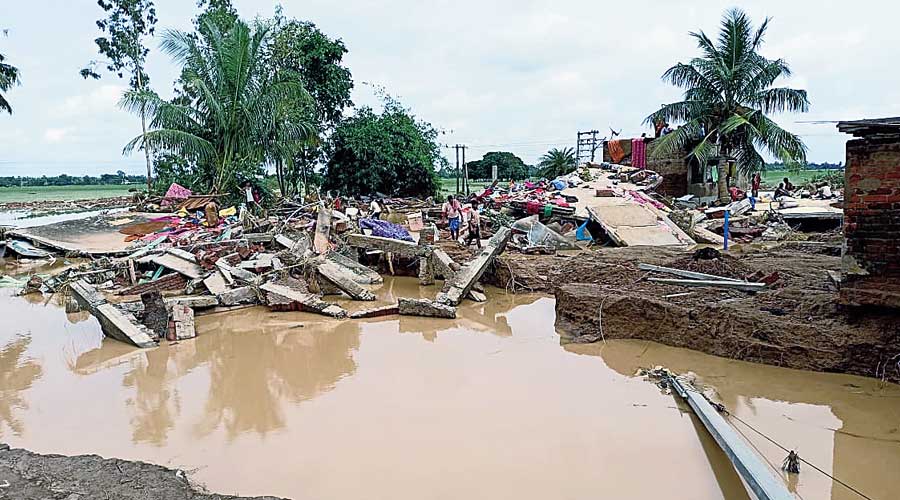 Concrete houses in Sundarpur village of Birbhum’s Nanoor washed away by floods after an embankment of river Ajay was breached on the release of water by Shikatia dam of Jharkhand.
Picture by Amarnath Dutta
Pranesh Sarkar , Pinak Ghosh   |   Calcutta   |   Published 03.10.21, 02:30 AM

The DVC on Saturday said that there were no procedural lapses in warning Bengal state officials before releasing water from its dams in response to the Bengal government narrative that floods were caused by indiscriminate release of water by the DVC without information.

The DVC releases water from its dams on advice of the Damodar Valley Reservoir Regulation Committee headed by a member from Central Water Commission and includes representation from Bengal, Jharkhand governments and the DVC, said the statement.

It said a warning is sent to Bengal’s irrigation department if it releases more than 23,000 cusec water from its dams. The first warning is sent six hours before release.

“Before the release of water, flood warning messages are communicated well in advance to chief engineers of West Bengal government, district magistrates of Purba Bardhaman and Paschim Bardhaman, Purulia, Bankura, and superintending engineer and executive engineer, Durgapur. The executive engineer, Durgapur, further communicates the messages to district magistrates of Hooghly and Howrah, SDOs, ADMs, BDOs and others...,” DVC said in a statement on Saturday.

State sources said the irrigation department had received a warning from the DVC that its dams would be forced to release more than 1.5 lakh cusec water from Maithon and Panchet on September 30.

A source said the first mail from the DVC does not cite how much water will be released as it updates on its website the amount after the first warning is sent. “The warning mail is forwarded to all DMs of districts concerned, the disaster management and top brass of Nabanna. It is advised the DVC website is monitored... This time too the process was followed,” said a Nabanna source. Two hours before release, the CWC chairman mails the irrigation department on the amount of water, and this is forwarded to the ADM of Asansol and West Burdwan authorities so that they can monitor the DVC Barrage, a protocol followed this time too, the state official said.