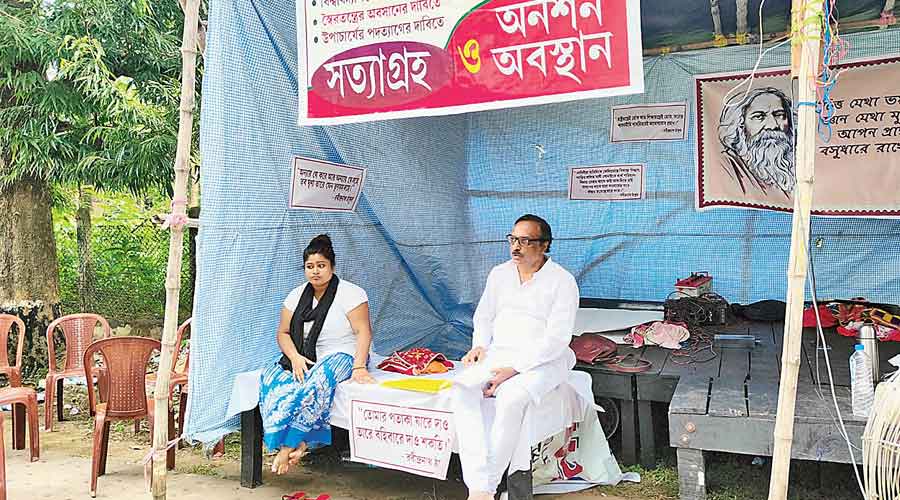 Rupa Chakraborty and Sudipta Bhattacharyya during their fast on Sunday.
Picture by Amarnath Dutta
Snehamoy Chakraborty   |   Santiniketan   |   Published 06.09.21, 02:05 AM

A rusticated student and a suspended teacher of Visva-Bharati started a relay hunger strike at the protesting students’ tent on Sunday, accusing varsity authorities of “lying in court” on Friday to allege that students demonstrating against vice-chancellor Bidyut Chakrabarty had locked up two gates on the troubled campus.

Contrary to the authorities’ claims, a police probe on Saturday indicated the gates had been locked up by varsity officials and not students, which triggered this hunger strike by Rupa Chakraborty, one of the three recently rusticated students, and economics professor Sudipta Bhattacharyya, who had been suspended months earlier.

Both had in the past protested against VC Chakrabarty’s alleged wrongdoings and “saffron leanings”. On Sunday, they said they would continue their hunger strike till “the end of all such episodes” on the campus helmed by the VC.

“It is the first time that a VC and his administration have clearly lied before court in order to trap (student) protesters. (To shame the ongoing protests against the rustication of three dissenting students) the varsity stopped paying salaries and halted the admission process and other activities, blaming protesting students for locking up two gates. Such lies were presented before Calcutta High Court. But police found both gates were locked up by varsity authorities. We know such lies were presented on the VC’s directive. Our relay hunger strike protests this,” said Bhattacharyya, also the Visva-Bharati University Faculty Association president. “Teachers’ Day is an apt day for this (fast),” he added.

Last week, when the VC’s residence had been gheraoed by students, the central varsity authorities purportedly had decided to stop disburing salaries for August. However, salaries were released immediately after a prod from the Union ministry of education.

Before that, the varsity had sought to halt the admission process and publication of results owing to the gherao, claiming the VC’s physical presence was needed for the jobs. However, the high court on Friday not only ordered protesters to shift from the immediate vicinity of the VC’s house but also asked the varsity to resume these tasks too.

“It is very interesting that varsity officials claimed these tasks could not be done without the physical presence of the VC. But the operations started again despite the absence of the VC. It proves that the VC lied,” said Rupa.

In court, Visva-Bharati claimed the agitators had locked two entry gates to the central administrative office and central library.

Police officers later said they found those gates had been closed by varsity authorities.

“It proves how the Bidyut Chakrabarty-led varsity authorities had submitted false charges against agitators,” added Bhattacharyya.

Students will be continuing their protests in a new tent that has also been objected to by varsity authorities. An official said Visva-Bharati might move court over the ongoing agitation.

Visva-Bharati’s officiating PRO Anirban Sircar did not take calls or reply to text messages when contacted by this newspaper on the varsity’s comments on the developments of the day.