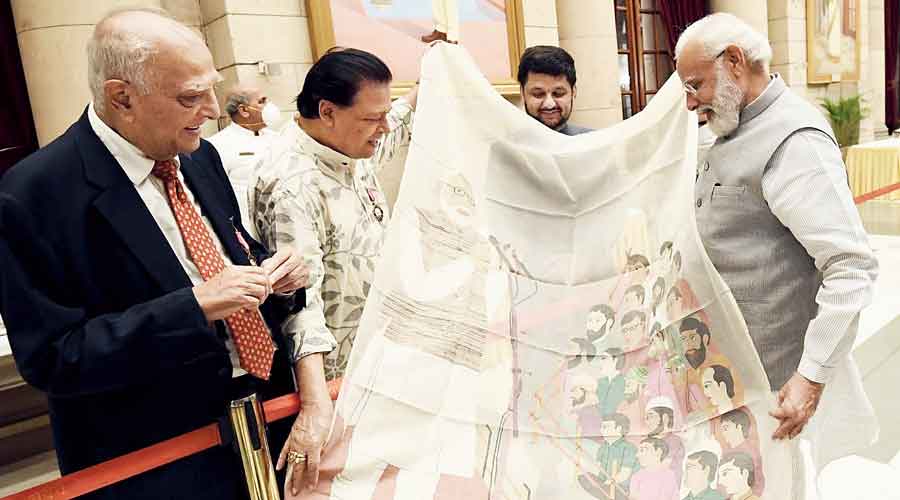 Phulia weaver Biren Kumar Basak’s Saturday morning started with Prime Minister Narendra Modi tweeting a picture of them together.  But the high did not last.
Basak, 70, had gifted Modi a handwoven Jamdani sari depicting Modi engaging with people symbolising India’s unity in diversity, including a man wearing a skull cap.
But soon, many netizens questioned  the Prime Minister’s faith in the spirit of India’s unity in diversity.
Basak was among the 119 Padma Shri award recipients this year. He handed the sari to Modi at the tea party that followed the award ceremony at the Ashok Hall of the Rastrapati Bhavan earlier this week.
At 8.51am on Saturday, Modi tweeted the picture, adding “During the interaction with the Padma Awardees, he presented something to me which I greatly cherish.”
While many praised the tweet, many others attacked Modi. Netizen Dibyendu Pal tweeted: “The people of West Bengal understand the sentiments of all religious communities so they have drawn this picture irrespective of Hindu-Muslim but you don’t understand that...”
Netizen Shiva tweeted: “Hopefully u wont judge people who are wearing a skull cap in the image…The diversity and unity of India needs to be accepted and cherished and it is indeed a great work from Biren Kumar...”
A post by Twitter handle “Shri” flayed the Prime Minister for his “divisive acts”. Many recalled Modi’s infamous statement of 2019 referring to CAA protesters, when he had said those indulging in violence “can be identified by their clothes”.