This year, this is the third such incident when workers associated with this ambitious railway project on difficult terrain have lost their lives 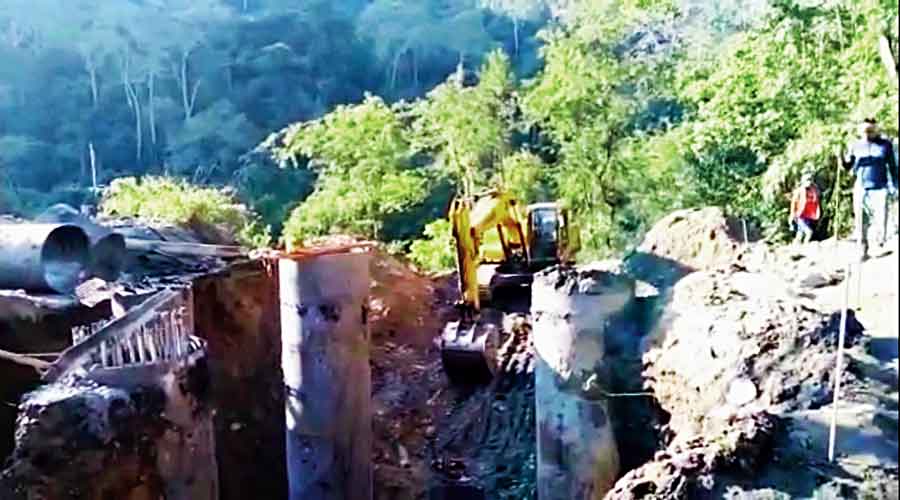 The site at Kalikhola off NH10 under Kurseong subdivision of Darjeeling district where two workers died.
Passang Yolmo
Our Correspondent   |   Siliguri   |   Published 21.12.21, 01:11 AM

Two workers engaged in the construction of the Sevoke-Rangpo railway project died in a slide at Kalikhola, some 30km from Siliguri, under Kurseong subdivision of Darjeeling district on Sunday night.

The duo got buried under debris.

This year, this is the third such incident when workers associated with this ambitious railway project on difficult terrain have lost their lives.

“Around 11.30pm on Sunday, two workers of the railway project died after a large chunk of debris fell on them. Their bodies have been recovered. They were sent to the North Bengal Medical College and Hospital on Monday for post-mortem. A case has been registered and our officials are investigating the incident,” said Manoranjan Ghosh, the additional superintendent of police of Kurseong.

The deceased have been identified as Karu Ram, 40, and Santosh Roy, 37, both residents of Giridih district in the neighbouring state of Jharkhand.

The bodies will be handed over to their relatives after the necessary formalities, sources said.

Officials of Ircon International Limited, a government company that functions under the railway ministry that is carrying out the work of the ambitious rail project to include the Himalayan state of Sikkim on the Indian railway map, said the duo were engaged in piling work for the foundation of a railway bridge (bridge number III) at Kalikhola.

“It was around midnight when suddenly a part of the earth slipped and workers came under the debris. Emergency rescue operations were carried out on an emergency basis and the workers were taken out of the debris. Unfortunately, none of them could survive,” said an official.

The mishap halted the work at the site on Monday.

In the past six months, this is the third such incident when workers engaged in the railway project have lost their lives.

On June 17, a worker in one of the under-construction tunnels of the rail project near Bhalukhola died after a rock crashed on him.

Again, on July 31, two other workers died at the project site, also near Bhalukhola, when incessant rain triggered a landslide and Mamkhola, a hilly stream flowing nearby, carried boulders and debris along with water and swept away the workers with their tent that they had pitched near a tunnel.

After these incidents, railway officials had time and again claimed they were taking all necessary precautions for the safety of the workers.

“The workforce is alerted regularly to minimise risks. But these are natural calamities,” said an official.

Back in 2009, the project was launched by the then railway minister Mamata Banerjee. The plan is to lay railway tracks along a stretch of 44.98km from Sevoke railway station (which is around 20km from here) to Rangpo, the bordering town of Sikkim.

As of now, the estimated project cost is around Rs 4,000 crore. In all, 14 tunnels and a number of bridges would come up in the route as a part of the project.

“The railway ministry is putting impetus on this project and there are plans to complete the job by December 2023. The route is also strategically important as it would connect Sikkim, the state that sits on the India-Chinese border, by railways,” said a source in the Northeast Frontier Railway.