It was a tussle of lung power as MLAs of both sides — 60-odd of BJP and 100-plus of Trinamul lawmakers — shouted slogans, which came in the way of the proceedings of the House 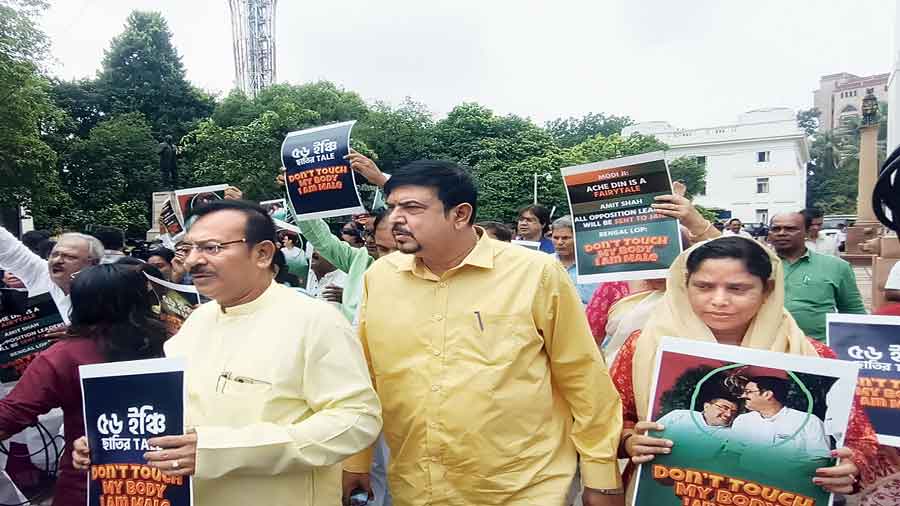 The Bengal Assembly saw an unprecedented face-off between the ruling Trinamul and Opposition BJP on Thursday, the dramatic scenes indicating combative posturing was set to rule the political discourse in the state in the coming months.

It was a tussle of lung power as MLAs of both sides — 60-odd of BJP and 100-plus of Trinamul lawmakers — shouted slogans, which came in the way of the proceedings of the House.

Slogans by the BJP MLAs had corruption as its theme — posters carried pictures of cash unearthed from the homes of former minister Partha Chatterjee’s aide Arpita Mukherjee. The Trinamul assault was built on Suvendu Adhikari’s comment on Tuesday during the BJP’s march to Nabanna to a woman constable, “don’t touch my body”.

After that, in an unprecedented move, the ruling Trinamul staged a protest rally inside the Assembly premises as a retaliatory action.According to BJP sources, Thursday was “a trailer” of how the saffron camp would conduct itself inside the House for the rest of the session till September 23. Altercation broke out at around noon when Speaker Biman Banerjee rejected an adjournment motion placed by seven BJP MLAs, including leader of the Opposition Adhikari. Banerjee said that the issue in the motion — corruption cases related to recruitments — is sub judice and cannot be entertained.

Adhikari, who was to speak for the motion, vehemently opposed it, triggering aggressive sloganeering and flashing of posters from both sides for 15 to 20 minutes.The House was adjourned and both sides staged simultaneous demonstrations inside the Assembly premises. BJP legislators occupied the portico accusing the state government of corruption.

Trinamul MLAs joined a rally around the Assembly, attacking Adhikari and Prime Minister Narendra Modi.“Have you ever seen the ruling party take out a rally against the Opposition inside the Assembly? It proves Trinamul is rattled,” said BJP’s Dubrajpur MLA Anup Saha.

Adhikari took a dig at Trinamul: “I thank the ruling side for joining our walkout.”Parliamentary affairs minister Sobhandeb Chatterjee defended his party to say Trinamul was protesting against BJP’s incessant attempts to disrupt the House. “They (BJP) have been doing this forever now. They have disrupted every session. This can’t be allowed to go on. We staged the rally to protest against it,” the minister said.

There was little doubt that the House would be stormy, given that BJP supporters clashed with state police on the streets of Calcutta on Tuesday. But the scale of disruption surprised many.“I can’t recall such combative posturing by the ruling party and the Opposition in the last 10 to 12 years.… Maintaining order in the House will be a challenge in this session,” said a veteran in the Watch & Ward team of the Assembly.According to multiple BJP MLAs, the body language of the ruling party bore hints that the corruption cases have demoralised the leaders.BJP chief whip Manoj Tigga said: “It has been decided in our parliamentary party meeting that we will attend the full session. But we will protest as and when necessary.”

The session on Friday is also likely to be equally stormy as the BJP is scheduled to place yet another adjournment motion on the issue of police excesses on its party workers on Tuesday.

“We will not let the House function if our motion is not entertained,” said a BJP source.

Sources said that on Monday, BJP MLAs will create another uproar inside the House as the treasury benches will table a resolution in the presence of chief minister Mamata Banerjee against the misuse of central agencies such as ED and CBI against the state government and Trinamul leaders.The combative approach of the two sides, a political scientist said, was not healthy.“Instead of discussing the issues that affect people, the two sides are only engaging in politics.… This is not healthy,” said the political scientist.