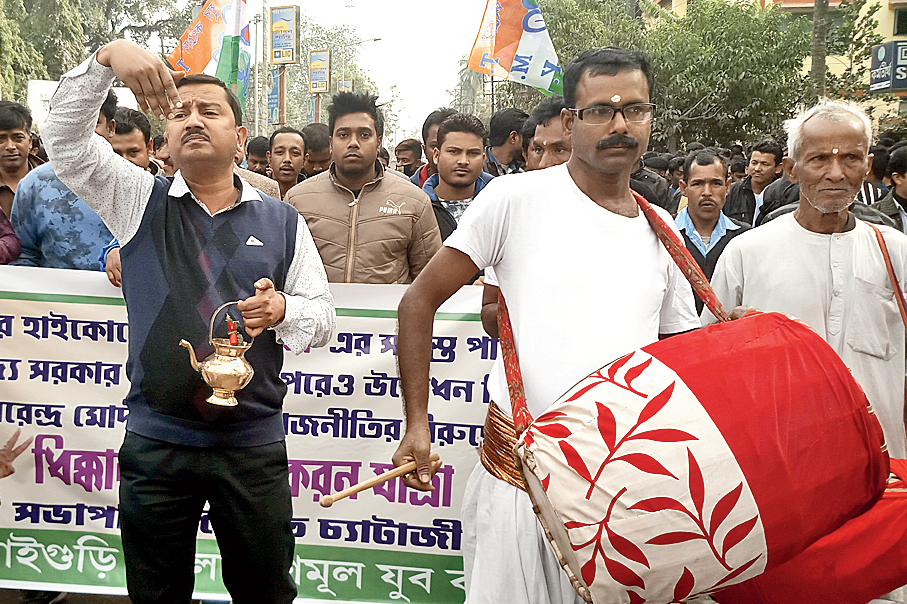 Trinamul leaders on Friday filed a police complaint against Prime Minister and National Highways Authority of India for mentioning their names in newspaper advertisement announcing a project to be flagged off by Narendra Modi without taking their consent.

Modi laid the foundation stone of the Falakata-Salsalabari section of NH31D on Friday.

The advertisement read that the prime minister would lay the foundation stone in the “august presence” of seven leaders.

Darjeeling MP S.S. Ahluwalia was the only BJP leader mentioned in the advertisement. The rest are all Trinamul legislators.

“The advertisement mentioned me as a guest without any consent. This has defamed me, following which I have filed a complaint at Alipurduar police station against the prime minister and the NHAI for necessary investigation,” said Sourav Chakraborty, the chairman of the Siliguri-Jalpaiguri Development Authority and the MLA of Alipurduar.

Chakraborty is also the Trinamul president of Jalpaiguri district.

After filing a complaint at the Alipurduar police station, Chakraborty reached Jalpaiguri and led a rally. Jalpaiguri MP Bijay Chandra Burman, Alipurduar MP Dasrath Tirkey and the Mainaguri MLA also participated in the procession and then filed their police complaints.

Trinamul leaders and workers said that they were surprised to find their names in the advertisement.

“I have called the engineer of the NHAI and asked him why they had done this. I have decided to take legal steps against the NHAI,” the Jalpaiguri MP said.

The MLA of Mainaguri and MP of Alipurduar echoed him and said the Centre had named them in the advertisement to malign their image in public with political intention.

Manoj Tigga, the BJP MLA of Madarihat, said: “We have never received any invitation from the state government to attend any government programme but the Centre has shown courtesy and invited the Trinamul public representatives.”