This time every household in the hills will come to know about our work: Anit Thapa 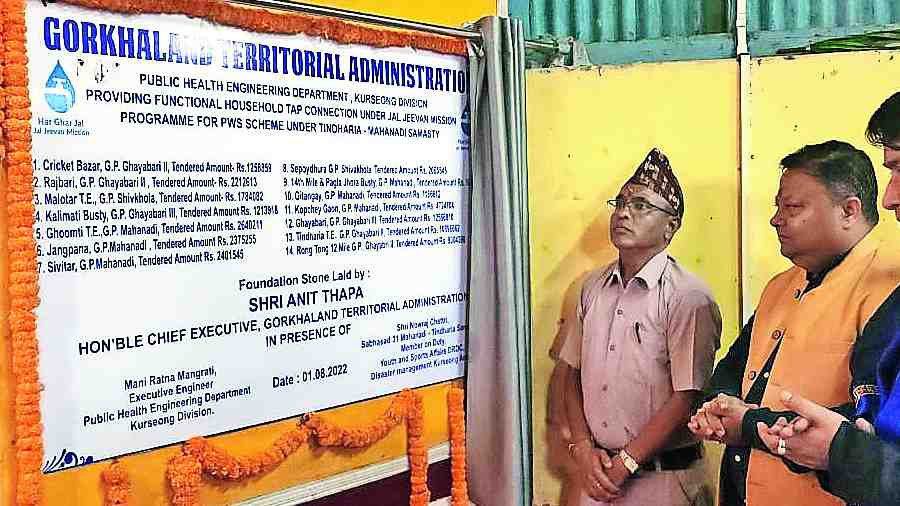 The new team of the Gorkhaland Territorial Administration (GTA) on Monday laid its foundation stone of projects with transparency on its lips.

The BGPM, which won the recent GTA elections, had faced a strong and sustained campaign from political rivals ahead of the polls of a “contractor-leader nexus”.

On Monday, BGPM president Anit Thapa and the chief executive of the GTA, appeared to try hard to correct that impression during a function to lay the foundation stone of projects at Tindharia under Kurseong sub-division.

Thapa said: “We are laying a foundation stone of 14 projects amounting to Rs 5.5 crore. This time every household in the hills will come to know about our work. There must be transparency in every work.”

Under this set of projects, 14 areas would be provided with household tap connections under the Jal Jeevan Mission.

Thapa further said that another water project worth Rs 50 crore would start in the area.

The GTA chief said that the hill body had decided to first start laying foundation stones from Tindharia as they had started their new innings from the area.

“We decided to start laying foundation stones from Tindharia as we had laid the foundation of a new beginning from Tindharia,” said Thapa, who added that while they had lost four previous elections, his party BGPM had not lost a single booth during this election.

Thapa had formed the BGPM in September last year.

Thapa added that they had understood in detail the drinking water crisis in the area while campaigning during the GTA elections. “This is why we decided to immediately start the project,” said Thapa.

Thapa was with Bimal Gurung’s Gorkha Janmukti Morcha from 2002 to 2017 and also a GTA elected member in charge of the public health engineering department from 2012 to 2017. He was later nominated as the chief executive of the GTA by the state government in 2020.