Polarisation bid by BJP during lockdown 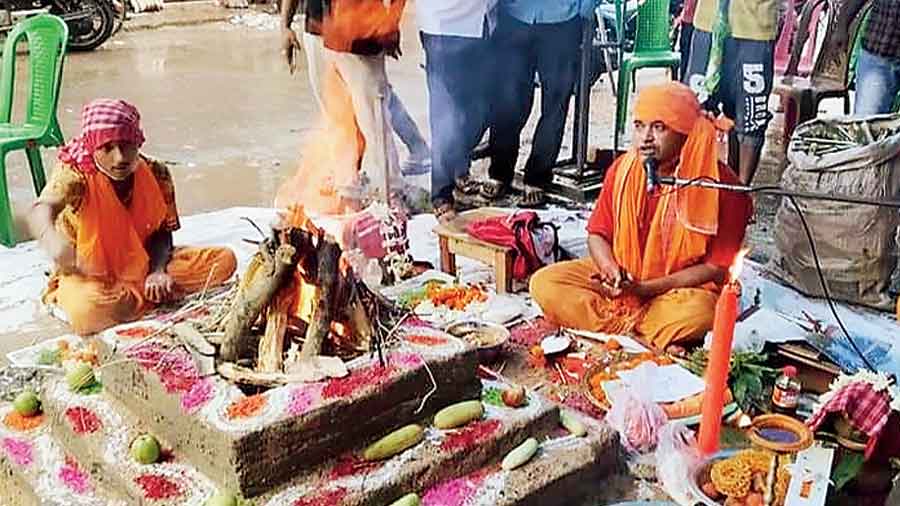 BJP workers and police clashed at several places in Bengal on Wednesday as the party sought to maximise gains from the bhoomi pujan at Ayodhya by allegedly provoking the ruling dispensation over violation of the complete lockdown.

The BJP didn’t have any official programme on Wednesday to mark the temple ceremony, but its foot-soldiers didn’t miss the opportunity to pursue the objective of polarisation, the most potent ammunition in its armoury.

The likes of BJP state president Ghosh and national-secretary Rahul Sinha organised “Ram puja” at their residences. Most BJP leaders blew conches when Prime Minister Narendra Modi laid the temple’s foundation stone in Ayodhya. They also lit lamps at their homes in the evening.

“That this government can’t respect the sentiments of Hindus is evident from the fact that even those who organised puja, abiding by lockdown norms, were stopped,” alleged Ghosh.

In West Midnapore’s Kharagpur, suspected BJP workers got involved in clashes with police after the administration tried to stop a ceremony that had over 100 people at the Hanuman temple of Talbagicha.

Sources said when the police asked the group to stop the event, the gathering, mostly BJP workers without flags, raised “Jai Shri Ram” slogans and vowed to not let anybody stop them. When the police were pushed into a baton-charge to disperse the mob, brickbats were hurled at them, injuring two police personnel. Later in the day, 14 people were arrested for the incident.

Across the state, Sangh parivar functionaries tried to provoke the ruling dispensation into aggressive reactions by accusing the government of insulting the Ayodhya event by imposing a lockdown, but the Trinamul leadership sought to handle the verbal volleys with restraint.

The chief minister herself steered clear of responding to any provocation and set Trinamul’s agenda with a significant statement on communal amity.

“Hindu Muslim Sikh Isaai / Aapas mein hain Bhai Bhai! / Mera Bharat Mahaan, Mahaan Hamara Hindustan (Hindu, Muslim, Sikh, Christian / Are brothers to each other / My India is great…). Our country has always upheld the age-old legacy of unity in diversity, and we must preserve this to our last breath!” tweeted Mamata.

In Birbhum’s Suri, BJP workers and leaders were involved in an altercation with police when they were on their way to attend a “Ram puja” at the party office. .

In two violence-prone districts of Nadia and North 24-Parganas, the police went on an overdrive and managed to dissuade organisers from conducting programmes.

In Rajarhat’s Narayanpur, local people had planned to organise a puja, but a group of miscreants allegedly went on a rampage, hurling bombs and firing bullets. A large police contingent was deployed in the area.

The villagers claimed the miscreants had the backing of Trinamul’s Tapas Chatterjee.

He dismissed the allegation. “These men are actually outsiders that the BJP had brought in to foment tension. In any case, religion is for practice at one’s home, especially during a pandemic,” Chatterjee said.

Asked if the administration’s actions had helped the BJP politically in the state, Dilip Ghosh said: “We have only been doing our job. What can we do if somebody breaks their own head?”