The death toll in the state now stands at 10 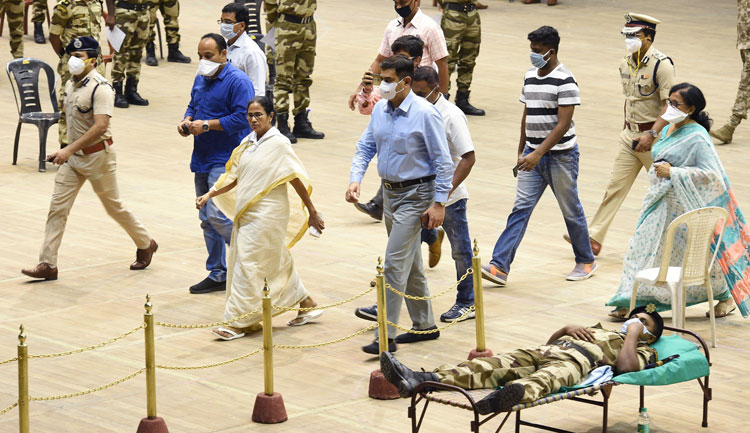 The Opposition has accused the Mamata Banerjee government of “under-testing” in the state to keep the infection count low and misrepresenting the death toll by not including casualties attributed to co-morbidities.
(PTI)
Meghdeep Bhattacharyya   |   Calcutta   |   Published 16.04.20, 11:42 PM

The death toll in the state now stands at 10, the government said.

“There were 132 active positive (cases) till yesterday (Wednesday). Since then, there have been 24 new Covid-19-positive cases. The audit committee confirmed three new deaths… total deaths 10 so far,” chief secretary Rajiva Sinha told a news conference at the state secretariat in the evening.

Sinha said there were 3,915 people in the 582 state-run quarantine centres, besides 36,982 others in home quarantine. The state government, he said, has distributed among its hospitals 3.47 lakh pieces of personal protective equipment, 2.23 lakh N95 masks, 15.7 lakh other masks, 6.95 lakh gloves and 70,000 litres of sanitiser.

The chief secretary said 341 tests had been conducted since Wednesday in eight laboratories sanctioned by the Centre, taking the number of tests done in Bengal to 3,811.

The Opposition has accused the Mamata Banerjee government of “under-testing” in the state to keep the infection count low and misrepresenting the death toll by not including casualties attributed to co-morbidities.

A committee of five senior physicians is ascertaining whether the death of any Covid-19-positive patient in Bengal resulted directly from the infection or from any co-morbidity. Those who the committee decides died from co-morbidities are not added to the Bengal death toll.

On Thursday, chief secretary Sinha said: “We prepare the list here. The moment we get a Covid-19 case, we add it to our dashboard here as a Covid-19-positive case. Death cases get immediately, automatically reported to the audit committee.”

Chief minister Mamata Banerjee, seated in the same room in Nabanna, did not answer the question and prodded Sinha to move on to the next point.

Some sources in the cabinet have been saying in private that Mamata and the government would run the risk of losing the “perception battle” if ambiguities replace the desired clarity at such official briefings, which people rely on during crises.

“We have done nothing wrong, so what is the problem in being more transparent and giving full clarity? Why are we allowing the Opposition to go to town with this image of us trying to cover up the extent of the outbreak?” asked a minister.

“We were so far ahead of the curve when the chief minister’s superb micro-management with a humane touch, combined with a consistent refusal to politicise the pandemic, was increasingly endearing her to the people and keeping even the harshest critics silent…. I think, somewhere over the past couple of weeks, we have been losing the plot.”