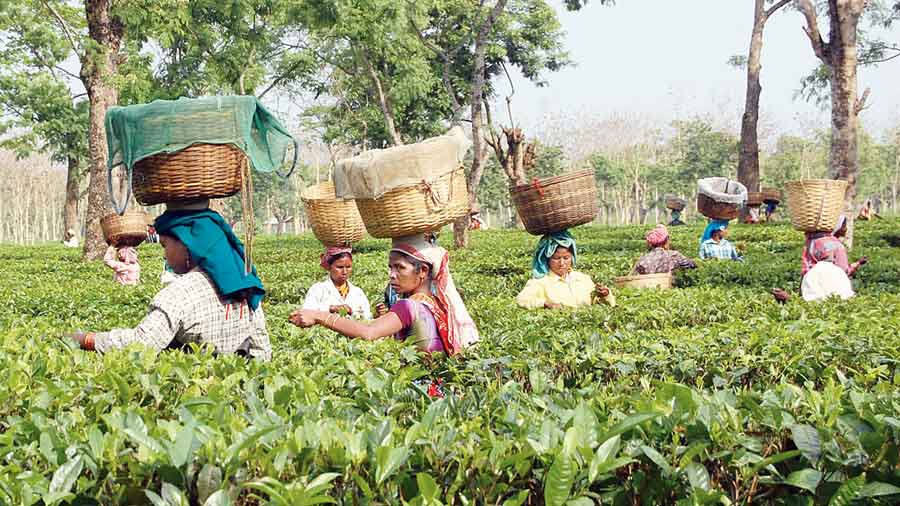 The north Bengal tea sector has around three lakh labourers, whose main demand is fixing of a minimum wage.
File Picture
Avijit Sinha And Anirban Choudhury   |   Siliguri/Alipurduar   |   Published 09.06.22, 01:33 AM

Mamata Banerjee on Wednesday announced that there would be an interim hike of 15 per cent in the daily wages of tea estate workers in north Bengal at a time plantations were witnessing demonstrations for the pay revision.

Tea planters and workers’ trade unions appeared clueless to the chief minister’s announcement of the interim wage hike. The state labour department had held several rounds of negotiations between the planters’ associations and the unions to bring about a consensus on the revised wage.

Workers receive a daily wage of Rs 202 as of now. While the planters proposed a wage hike of Rs 20, the unions wanted the pay to be raised to Rs 240. If Mamata’s announcement materialises, the wage would go up to Rs 232.

“Before we came to power 11 years ago, tea garden workers used to receive Rs 67 a day. We have increased it to Rs 202. It will be increased further as there will be an interim hike of 15 per cent,” Mamata said while attending a public distribution programme-cum-mass wedding of tribal couples in Alipurduar district on Wednesday. The event was held on Subhasini tea estate in Kalchini block.

There had been a 15 per cent hike in the wages of workers and the salaries of staff and sub-staff in the tea sector in January last year.

The north Bengal tea sector has around three lakh labourers, whose main demand is fixing of a minimum wage. Representatives of the state government have been holding parleys with different stakeholders of the tea sector since 2015 on the minimum wage.

Around 10,000 staff and sub-staff members in the tea sector also want their minimum salary to be fixed or else, an agreement on pay revision that would be in force for three years.While labourers held demonstrations for the wage revision, the staff and the sub-staff observed a three-day strike last week.

The state labour department was supposed to hold another meeting in 10 days to discuss the pay revision. “In such a situation, the chief minister’s announcement indicates that the government wants tea planters to revise the wage on an interim basis while negotiations on fixing of minimum pay continue,” said a senior trade union leader.

Reacting to Mamata’s announcement, Chinmay Dhar, the chairman of the Dooars branch of the Tea Association of India, said: “We do not have information in this regard. However, if the state comes up with an order and recommends such a hike, we will have to abide by it.”

A senior planter in the Darjeeling hills, on the other hand, said such a sudden hike would mount pressure on tea producers. “The cost of production has been on the rise and the price we fetch is no longer high. In such a situation, a hike of 15 per cent in wages would add to the production cost. This additional financial load would put a number of tea estates in jeopardy,” he said.

He said it was not clear if the chief minister’s announcement would be applicable to the staff and sub-staff also.

Gopal Pradhan, the president of the Dooars Cha Bagan Workers’ Union, said if there was a hike of 15 per cent in the daily wage, it would increase to Rs 232 from Rs 202. “At the last meeting, we had demanded a hike of around Rs 40. If the state is proposing a hike of around Rs 30, we will have to discuss the matter with other unions.”