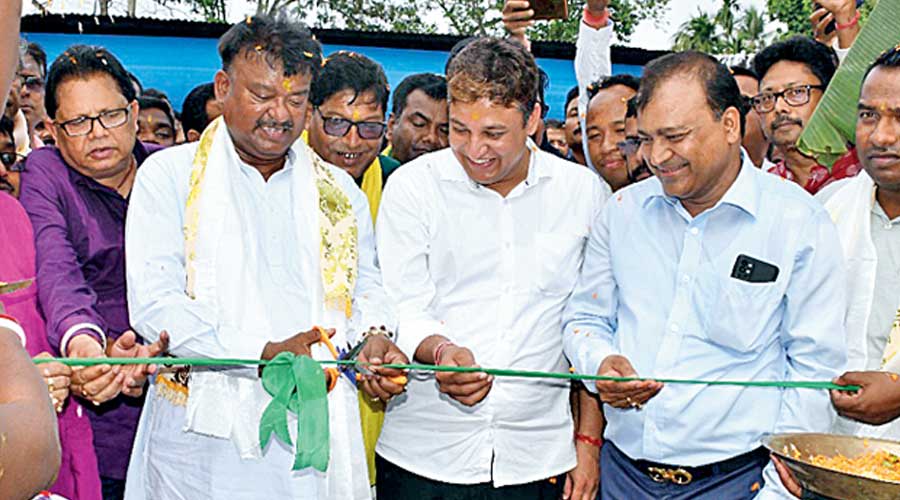 Minister Becharam Manna cuts a ribbon to mark the reopening of the Madhu tea estate on Wednesday.
Picture by Anirban Choudhury
Anirban Choudhury   |   Alipurduar   |   Published 14.04.22, 01:33 AM

Madhu tea estate in the Kalchini block of Alipurduar district reopened on Wednesday after seven years.

The garden had been shut on September 23, 2014, following disagreement between workers and the management over bonus. In the past, repeated initiatives had been taken by the state government to facilitate the reopening of the garden but in vain.

Four years ago, the state land and land reforms department cancelled the garden’s lease which was with the Diabari Tea Company Limited.

Sources have said Shyam Sundar Goyal, who owns another tea estate in the Dooars, has taken over the Madhu garden.

State labour minister Becharam Manna was present in the garden on Wednesday morning, along with Alipurduar district magistrate Surendra Kumar Meena and assistant labour commissioner, Md. Rizwan, to be part of the workers’ celebration.

Despite torrential rain, the workers were seen celebrating the reopening of the garden.

Sources said of the 951 workers, more than 300 have left the garden in search of work.

There is also concern regarding clearing of electricity dues of the previous management.

Since the electricity dues have not been cleared, power has been disconnected in the garden.

“State officials have assured to take up the matter with the electricity people to resolve the issue,” said a source.

Even though there was a general sense of happiness among workers on the reopening of the garden, there were apprehensions in some quarters, too.

“Many workers have died in the last seven years and the management is sending signals that they might not recruit in these vacancies immediately,” said a source.

Labour minister Manna assured workers that the state government would continue to provide assistance to workers under the financial assistance to the workers of locked-out industrial units (FAWLOI) until the garden factory starts operations.

Workers of closed units get a monthly financial support of Rs 1500 each under this scheme.