Tea estate reopens after a month 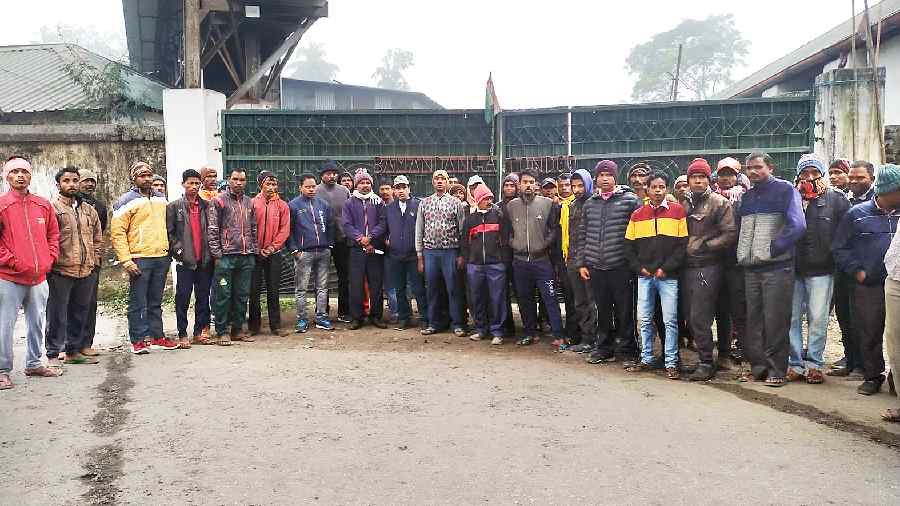 File picture of workers in front of the factory of Bamandanga-Tondoo tea estate on December 27, 2022, after the management announced suspension of work
Our Correspondent   |   Jalpaiguri   |   Published 26.01.23, 05:18 AM

The gates of the Bamandanga-Tondoo tea estate located in Jalpaiguri district reopened on Thursday after a gap of a month, to the relief of around 1,600 workers.

On December 27 last year, the management announced suspension of work in the garden alleging that some workers resorted to protests, disrupting regular activities.

The state labour department took up the initiative to convene tripartite meetings to facilitate the reopening of the garden. On January 20, a meeting was held at the deputy labour commissioner’s office here where the management representatives and trade union leaders reached a consensus on various issues.

“According to the decision made at the meeting, the garden reopened today. It is a major development for the workers as the new season is about to start. The garden, we believe, can resume production from the start of the season,” said a senior trade union leader.

Located in Nagrakata block of western Dooars, the garden is owned by Jayanta Roy, the brother of Prasanna Roy, supposedly a close associate of former state education minister Partha Chatterjee. Chatterjee is behind bars now for his alleged link with the SSC scam.

Amarnath Jha, a block-level Trinamul leader, held a meeting with workers on Tuesday and Wednesday.

The workers, who thanked the state labour department, simultaneously said the management should clear their dues.

“Wages and some other payments are due. We hope the management will disburse the money soon,” said worker Pushpa Kharia.

Officials of the labour department confirmed the garden has reopened. “There are certain issues on which the management and the trade unions will hold bipartite talks in the next two weeks,” said Subhagata Gupta, the deputy labour commissioner of Jalpaiguri.