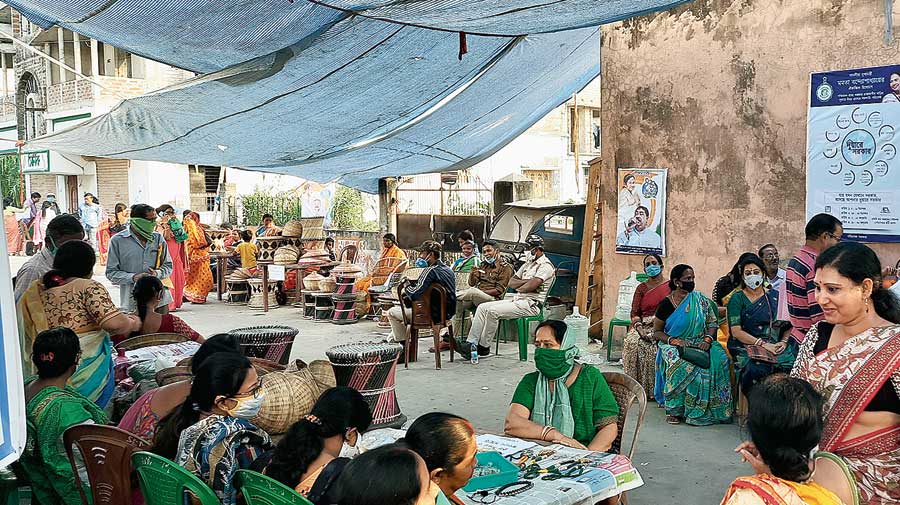 The Bengal government has asked district authorities to set up special kiosks for the Swathya Sathi scheme at the camps under the Duare Sarkar (government on doorstep) programme after it appeared that 60 to 70 per cent visitors were applying for the free-of-cost health insurance that gives coverage up to Rs 5 lakh.

“On Wednesday, a clear instruction was given from the top brass of the government that a separate arrangement be made to attend to those who are coming to get information related to Swasthya Sathi. On the first day, it was observed that 60-70 per cent of the visitors applied for the health insurance scheme,” said a senior government official.

On Tuesday, the first day of the 60-day programme to reach out to people left out of government schemes, more than 1.25 lakh people had turned up at 20,000 odd camps set up across the state.

“Although today’s final report is yet to be compiled, data from districts suggest that number of visitors did not drop significantly on the second day. Majority of the visitors on the second day were also showing interest in Swasthya Sathi,” said a source.

In Birbhum, out of 7,711 persons who had visited the camps on Tuesday, 5,716 had applied for Swasthya Sathi. Around 3,600 of 6,000 people who turned up at camps in Bankura on Tuesday also applied for the same scheme.

“The figures show people are interested in the scheme and that’s why the government is laying stress on special kiosks,” said a source

“The government would try to reach out to 2.5 crore people who are yet to be brought under the scheme through the Duare Sarkar programme,” said a source.

Officials also pointed out that the government was laying stress on delivery of services on time.

“There is a clear instruction to issue health insurance cards to those who will apply through the camps at the earliest. Required equipment like biometric scanners has to be installed at the camps so that the cards could be issued instantly,” said an official.

People showing interest in Swasthya Sathi is an encouraging sign for the ruling establishment as the BJP has been attacking the Trinamul government for not implementing Ayushman Bharat, a similar health scheme run by the Centre, in Bengal.

The state government has also asked district administrations to allow self-help groups to set up stalls at the Duare Sarkar camps from where they can sell their produce.

“We have already asked all blocks to set up stalls for self-help groups to sell their products. It would help the women of the groups earn money too,” Bankura district magistrate S. Arun Prasad said.

Moushumi Mukherjee, the head of a self-help group which set up a stall at a Duare Sarkar camp in Bolpur town. Said: “My team sold homemade food and ornaments worth Rs 1,000. We would go to other camps in Bolpur town.”