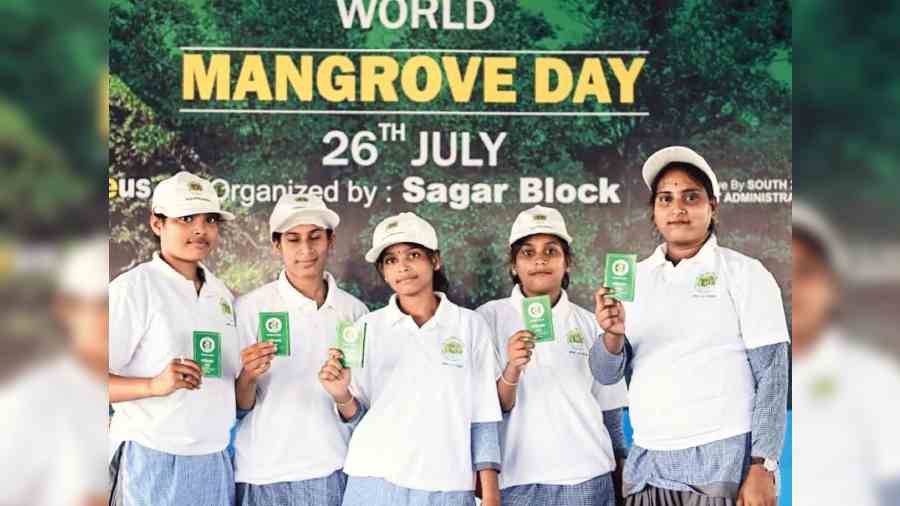 South 24-Parganas district administration has engaged senior girl students, who are beneficiaries of the state government’s Kanyashree scheme, as “Mangrove Yoddhas” (Mangrove Soldiers) to monitor growth of the mangrove plant sapling, sensitise local people make them aware about the need to protect the mangrove forest in the Sunderbans delta.

The district administration in association with the local administration launched the plan on the occasion of World Mangrove Day, which was observed on Tuesday.

South 24-Parganas district magistrate Sumit Gupta handed over “Mangrove Yoddha” identity cards to the girls at a programme in Gosaba on Tuesday. The identity cards would “empower” the students to keep vigil on the mangrove plantation in the area and to monitor the growth and loss of the plants in coordination with local administration and voluntary organisations in a comprehensive manner.

“Our aim is to create awareness from the home front. These girls will be trained to take a pioneering role as the saviour of the mangroves in a larger way. Elders learn better from their children. We are hopeful that the children will involve people to protect the mangrove,” Gupta told The Telegraph.

Mangrove is a group of plants — shrubs or small trees — that grows in coastal saline or brackish water. The dense network of roots, mangrove plants and surrounding vegetation, helps to prevent erosion of banks in the Sunderbans.

As per the assessment done by the state government last year, around 28 per cent of the Sunderbans forest, spanned over 9,630 sqkm was damaged in Cyclone Amphan. Out of this, around 4,263 sqkm mangrove plantation has been damaged in the region.

A forest officer said to protect the mangrove forest in the delta, a large number of saplings are planted every season. “But many such plants are damaged and at the same time mature plants are often felled by unscrupulous people. As a result, growth and protection of mangrove have become unsustainable. We need to overcome this,” he added.

Gupta said: “We have already planted 12 crore mangrove plants. This year we

have planned to plant about two crore saplings. But we want to ensure that these plants are not damaged or lost due to careless approach of people. The Kanyashree girls have been assigned the task to keep a vigil and create awareness.”

A Class XII girl in Gosaba, who has become Mangrove Yoddha, said: "It is a challenging task...I am hopeful to make people involved in the endeavour to protect the plants."

At another event, a group of around 400 women, including tiger widows from the Sunderbans, on Tuesday planted around 6,000 mangrove saplings to observe the World Mangrove Day under the leadership of a teacher Umashankar Mondal, who has earned the moniker of Mangroveman for his year-long efforts in plantation.

"We will plant over 10,000 mangroves in the coming five days. Many people from different areas helped us to continue this effort," said Mondal.