The plant can now give the institution surplus power, with authorities considering a supply line to the WBSEDCL as part of its social responsibility 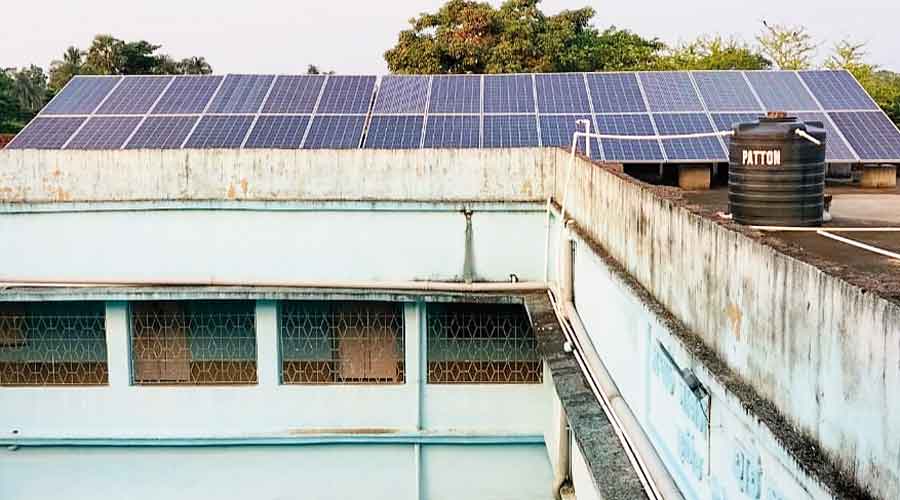 Recurring woes of paying a fat electricity bill are over for the Masat Girls’ High school authorities at Diamond Harbour-I block of South 24-Parganas.

The school recently installed a 10MW mini solar power plant to meet its regular electricity needs free of cost. The solar power plant can now also give the school surplus power, with authorities considering a supply line to the WBSEDCL as part of its social responsibility.

The Barrackpore division of Hindustan Aeronautics Limited (HAL), the state-owned aerospace and defence company under the ministry of defence production, had earlier this year given the school a Rs 30.5 lakh grant for a mini solar power plant and a rainwater harvesting system.

The school with 1,400 students, which used power supplied by the WBSEDCL, switched to alternative power in October-end to run its ceiling fans, lights, computers, lab equipment and water pumps.

The projects will be formally inaugurated soon in the presence of senior HAL officials and South 24-Parganas district administration.

Masat Girls’ High School headmistress Aparna Mondal called the solar plant a “big relief”. “We had a average monthly expense of about Rs 12,000 towards the electricity bill. But the alternative source of power helped us get rid of it,” she said. “We are very  thankful to the HAL authorities and to Diamond Harbour-I BDO Milantirtha Samanta who conceptualised the project and approached HAL.”

Asked what led him to propose the school project to HAL for a grant, BDO Samanta told The Telegraph: “I visited the school for its golden jubilee celebrations recently. It seemed the school located in a backward area needed support. I came to know about its recurring electricity bill. I thought, why not save this amount so that the money can be used for other purposes. I approached HAL authorities and what they offered was more than our expectations.”

HAL authorities released the funds to the BDO by virtue of his being the project’s executing authority. The BDO invited tenders to set up the mini solar power plant.

“The mini solar plant has 10MW capacity, but the school needs only 4MW. So we are mulling export of the surplus to the WBSEDCL,” Samanta added.

An official of the WBSEDCL in Calcutta explained the benefits of the system. “There is a provision of such export from solar plants. Any surplus power generated through solar plants can be fed into the grid, which can be adjusted with what schools take from the grid when solar systems do not meet their needs, particularly during monsoon,” he said.

HAL’s Barrackpore division’s manager (HR) Pradip Kumar Ganguly said schools in urban areas get support from many sources. “Hence, we decided to support a school in an area where sustainable development is sustainable. So when the Diamond Harbour-I BDO requested us to support the Masat Girls’ School, our authorities chose it for obvious reasons.