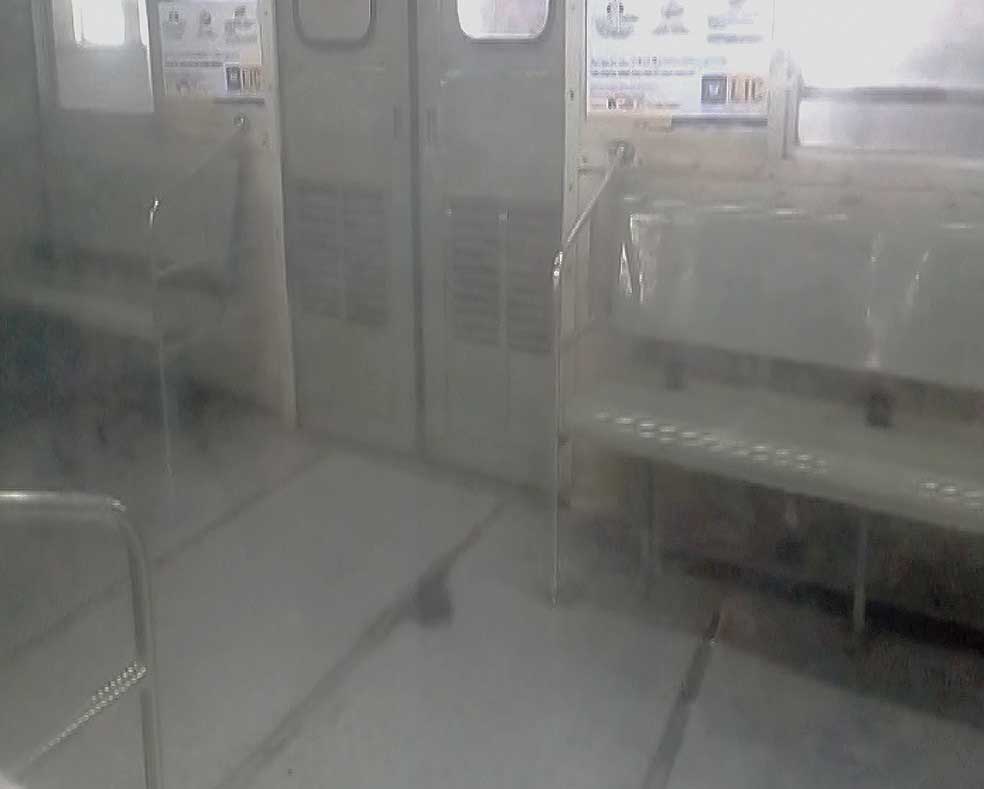 A three-decade-old Metro rake spewing smoke from its undercarriage while leaving Dum Dum station on Thursday morning triggered panic among passengers and left some of them feeling breathless, including a woman who had to be hospitalised.

The Metro schedule from Dum Dum was disrupted for around 20 minutes till the next train came in.

Smoke was spotted under the last compartment, just in front of the guard’s cabin, when the train was pulling out of the station.

As smoke filled the compartment, the driver stopped the train and all the passengers got off safely. The rake was taken back to the Noapara car shed. The next train to New Garia arrived at 11.14am.

Monalisa Akhtar Molla, a 21-year-old student, was taken to RG Kar Medical College and Hospital with symptoms of severe breathlessness. The other passengers received medical attention at the station.

“My sister had to be put on oxygen,” Monalisa’s elder sibling Iqbal Hossain said. “She is better now but has been kept under observation.”

This is the fourth incident involving smoke or fire inside a Metro train in little over a month (see chart). On December 27, a north-bound air-conditioned train caught fire between Rabindra Sadan and Maidan stations. Several passengers were injured in the accident, most of them after jumping out through windows shattered to let in air.

Metro Railway has long been struggling to handle the increase in passenger volume — around 7 lakh people currently take the Metro every day — with an ageing fleet.

The rake that had caught fire in December was the firstborn of the air-conditioned fleet. The one that malfunctioned on Thursday is 30 years old, according to a senior official.

“The lifespan of these trains is around 25 years. We have been able to stretch that through regular maintenance,” the official said.

One of the cables carrying power from the third rail is suspected to have caused the spark that led to smoke entering the compartment from the undercarriage of the rake. “The worn-out cable insulation was possibly to blame,” a source said.

Metro Railway operates with 25-odd rakes, of which 13 are air-conditioned. At least four of the remaining seven non-AC trains are 30 years or older, officials said.

The transport lifeline needs a minimum of 20 rakes in good shape to maintain its daily schedule. Two rakes are supposed to be on standby, but that has apparently not been the case over the past few days.

The rake that caught fire between Maidan and Rabindra Sadan stations was re-inducted into the fleet only a few days ago. The rake stalled by smoke on Thursday will also be benched for two-three days at the least, officials said.

Metro Railway reduced the number of weekday trains from 300 to 284 starting last Monday, citing a speed restriction at Esplanade for the duration of a tunnel-boring operation for the East-West Metro.

The unofficial buzz is that the number of trains in a day is unlikely to be restored to 300 before at least two of the four rakes that arrived in 2017 are deployed. These rakes had flunked multiple trials over 18 months before being cleared in December. Metro Railway still needs the Railway Board’s green signal to deploy them.