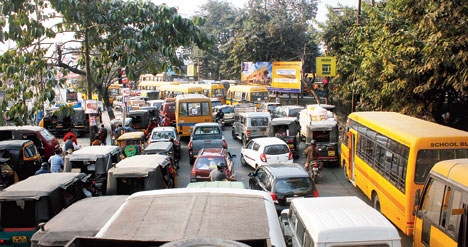 Calcutta: Siliguri has "smoked past" several cities to become one of India's most polluted urban centres, according to the first set of central data on the north Bengal town that suggest its air quality is "very poor" and worse than Delhi's.

According to Central Pollution Control Board figures accessed by The Telegraph, Siliguri's air quality index (AQI) averaged 344 between February 8 and 13. Exposure to such conditions may cause "respiratory illness on prolonged exposure".

On February 8, the reading for Siliguri was 415, indicating "severe" conditions that may affect even those who are healthy. Readings above 200 denote poor air quality, while data below signify moderate to good air quality.

The AQI is based on a dominant type of local pollutant, in this case particulate matter (PM) 2.5. PM 2.5, the tiniest possible toxic, is ultra-fine and considered the most harmful because of its ability to penetrate the deepest crevices of lungs and trigger a range of diseases. The pollutant is mainly generated from diesel fumes or coal burning.

Siliguri's air quality was poorer than Delhi, Ghaziabad and Faridabad, the other high-pollution pockets of the country. Calcutta figures are not available as air-measuring stations in the city have been lying defunct for the past few months.

The Siliguri numbers did not surprise many and they cited diesel vehicles as the main contributor to the pollution.

"I am not surprised ... if one goes out in road, there is so much pollution mainly due to traffic congestion, that eyes get filled up with water," said Jeta Sankrittayan, a professor in North Bengal University.

Sankrittayan pointed out that though some traffic planning was prepared earlier but nothing happened on ground.

Experts pointed that lack of any administrative effort to discipline the hawkers and traffic - vote bank for all political parties - is the principal main cause behind the city getting the unwanted topper ranking. In the city, absence of new and alternative roads and flyovers, leads to congestion of traffic.

The Hill Cart Road, Sevoke Road, Burdwan Road, Bidhan Road and the stretch of NH-31 that skirts through north-western end of the city witnesses maximum flow of traffic.

"Vehicles of all sorts ply side by side as well as people walking on roads, with most footpaths being occupied by hawkers. It is but natural that vehicles, mostly diesel driven, continue to emit unburned fuel into air, causing this high pollution. Time is not far off when we have to walk with mask in Siliguri," said Raj Basu, who had been working on conservation of nature and tourism.

State tourism minister Gautam Deb, who hails from north Bengal, stressed the need to look at the data closely. "We need to see the results in detail. However, there is no denying that the city's vehicular load is very high and that too on some roads. This is leading to such a situation."