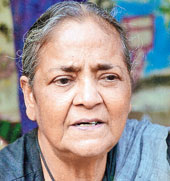 Shanu Lahiri, the city’s first lady of public art, died in the city on Friday. She had created the statue of Parama inspired by folk dolls of Bengal on the Bypass. From the 1980s and late into the 1990s, Lahiri had continued her efforts to fight squalor with art, and beautify Calcutta by clearing walls of graffiti and posters and painting over them.

She had painted on the walls of La Martiniere for Girls, the Philips office adjacent to Jadubabu’s bazaar and other north and south Calcutta areas.

Lahiri was born in 1928. Her two famous elder brothers were writer Kamalkumar and artist Nirode Mazumdar. She was trained at Government Art College from where she graduated in 1951, and held her first exhibition during this period. That year itself, a scholarship enabled her to join Ecole du Louvre and Academy Julien in Paris. She won the AIFACS President Award the same year.

After a hiatus, she took up painting with renewed vigour in the early 1960s. She had done series such as Raban Chitramala, Ragmala and Mahila Mahal. Her works reflected contemporary reality. In 1983, she started The Group, comprising four women painters and a sculptor at the request of artist Karuna Saha. She used to teach at Rabindra Bharati University and later became dean of faculty of visual arts.