Santiniketan survey on boundary wall on the Pous Mela ground 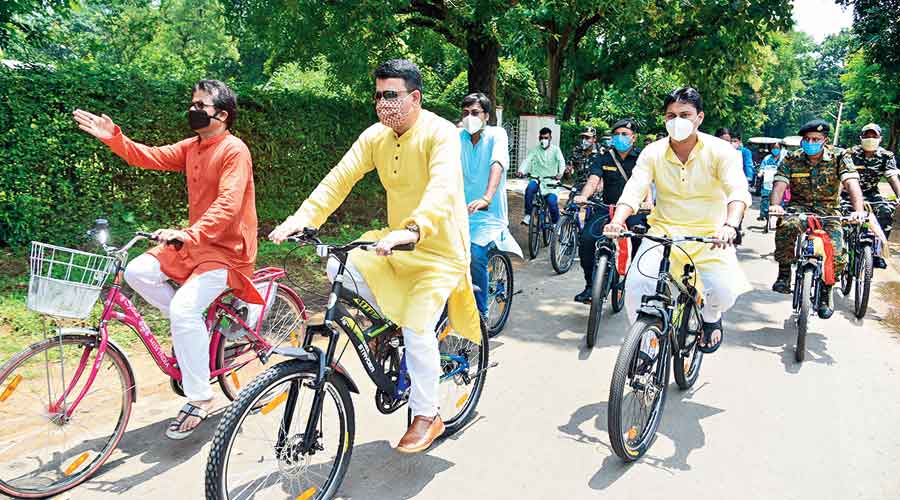 SP Shyam Singh (in yellow kurta with sunglasses on) and other police officers cycle in Santiniketan on Sunday
Indrajit Roy
Snehamoy Chakraborty   |   Santiniketan   |   Published 24.08.20, 01:09 AM

A group of senior police officers led by Birbhum district police chief Shyam Singh, dressed in ethnic-wear and riding bicycles, reached the doorsteps of half a dozen senior citizens of Santiniketan on Sunday afternoon to draft a ground report on the controversial boundary wall on the Pous Mela ground.

Starting around noon on Sunday, the police team comprising additional superintendent of police (Bolpur) Shiba Prasad Patra and Bolpur subdivisional police officer Abhishek Ray, along with officers-in-charge of three police stations — besides Singh — undertook a 10km journey till about 2pm.

Singh said the team had visited the homes of senior citizens in order to take stock of the boundary walls. “We were informed of an example, where the varsity had put up a high wall in front of the home of an elderly woman…. We will send the report to the state government.”

Asked about the attire and the cycles, Singh said: “There is a tradition of this in Santiniketan, where even a Nobel laureate (Amartya Sen) used to roam on a bicycle. Kurta-pyajama is also part of the culture of Santiniketan.”

The boundary wall issue has snowballed into a political battle between the Mamata Banerjee government and the central varsity, of which Prime Minister Narendra Modi is the chancellor.

The police team held brief talks with senior residents in order to know their opinion.

Neela Bhattacharya, a member of the Tagore family and a resident of Ratan Pally, reportedly showed the cops how Visva-Bharati authorities were putting up a high boundary wall that blocks the view from her home.

“Rabindranath’s elder brother Dwijendranath was my great maternal grandfather, and we have been associated with Santiniketan for so long. It hurts me when I find a high wall just in front of my house blocking my view. I tried to object, but nobody listened to me,” said the septuagenarian.

Besides the Pous Mela ground, Visva-Bharati recently also put up two walls at Ratan Pally in front of the house of Santidev Ghosh, a notable Rabindrasangeet exponent.

“We found at least two high walls that were recently put up, which the veterans protested against fiercely,” said Singh.

During the team’s visit, Shanta Bhanu Sen, a cousin of Amartya Sen, also met Singh by a concrete wall near Sangeet Bhavana.

Police sources said the move to compile the ground report was taken following a meeting by citizens with the district magistrate on August 20. Vice-chancellor Chakrabarty had skipped the meeting.

The VC convened an “emergency” meeting on Monday to discuss the boundary wall issue and activities on the campus, sources said.