Channels will be dug to carry the cables that currently hang from lamp posts and trees along roads, pavements and above dividers and even balconies 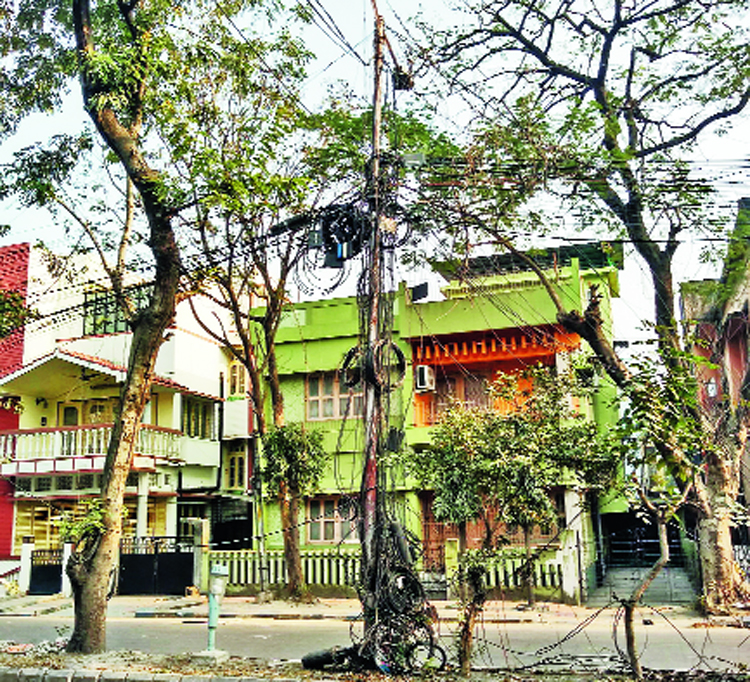 The Bidhannagar Municipal Corporation has decided to do what Calcutta is still undecided on — clearing the mess of overhead cables.

Salt Lake’s civic custodian has decided to remove all overhead cables within its jurisdiction and transfer them into underground channels to make the township and its adjoining areas look cleaner, besides ensuring unhindered movement of fire engines in the event of an emergency.

Most of the encroachments on the skyline are by cable television operators. Some of the cables belong to broadband service providers.

Once all cables are transferred underground, the municipal corporation intends to charge a fee from cable service providers proportionate to the number of connections they have in a particular area.

“We have decided that overhead cables will have to go underground. There can be no two ways about it,” Bidhannagar mayor Sabyasachi Dutta said. “The maze of cables tied to lamp posts and trees not only make the skyline ugly but also pose a threat to safety. Cables should not come in the way of fire engines during an emergency.”

While the proposal has been in the pipeline for some time, a recent meeting of the mayors-in-council resolved to go ahead with it. The resolution was later cleared at a meeting of the board.

Channels will be dug throughout Salt Lake to carry the cables that currently hang from lamp posts and trees along roads, pavements and above dividers and even balconies.

New Town is the only area where overhead cabling has so far been prohibited. In the city proper, the 143-year-old Calcutta Municipal Corporation has yet to figure out how to deal with the cable maze. A pilot project for conduit cabling was proposed last year but has not been implemented.

When a building called Gurudas Mansion at the Gariahat junction caught fire early on Sunday, firefighters ran into an aerial maze of cables that delayed their attempt to reach wherever the flames had spread. Some of the cables had to be cut so that fire engines could move.

It was no different at Bagree Market in central Calcutta last September. As the building burned, overhead cables prevented the fire brigade from deploying a skylift to take its personnel to the upper floors.

For a city used to the sight of ugly, intertwined cables hanging from posts and trees, there was a flicker of hope when the government announced last June that portions of Park Street, Alipore Road and Belvedere Road would be rid of them. It was proposed that cable operators would pay a “carrying charge” for use of alternative ducts or channels created by the civic body.

Calcutta is still waiting but Bidhannagar is off the blocks. “We have decided to start with Salt Lake. The RailTel Corporation of India Ltd has been commissioned to carry out a survey of cabling in the township as the first step,” mayor Dutta said.