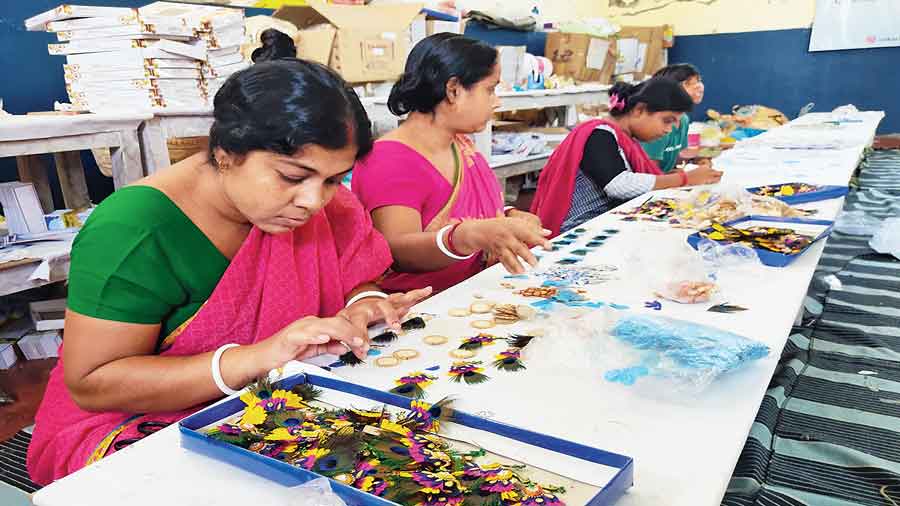 Rakhis made of water hyacinths have been sent by a civic body in West Bengal to several global leaders, besides President Droupadi Murmu, Prime Minister Narendra Modi and Chief Minister Mamata Banerjee, a senior official said.

The weed, which grows in abundance in fresh water bodies in the state, is locally known as 'Kochuripana' and is a cause of headache for those tasked with cleaning rivers, tanks and ponds.

The rakhis were made by self help groups and sent to the leaders to spread the message of brotherhood and showcase the state's efforts to use the biodegradable waste material for the economic and social uplift of women.

"The use of water hyacinth will also help generate employment for locals as handicraft made from water hyacinth are in great demand in several countries and provide export opportunities," the chairman of Bongaon Municipality Gopal Seth said.

Bongaon is in North 24 Parganas district on the borders with Bangladesh.

Seth said the municipality has undertaken efforts to make handicrafts from water hyacinths for the past three to four months with inspiration from Mamata Banerjee and support of the state government.

"Some 1500 women of SHGs are engaged in this endeavour. They are making about 50 items like bags, files and many other items from water hyacinth. The SHG members are making at least Rs 7000 to Rs 8000 per month," he said.

Seth said 30,000 rakhis made of water hyacinth has been made for the festival, which falls on Thursday. Half the number has already been purchased by the state government and surprisingly bus operators in Bongaon have taken 3000 of them.

"There is a strong demand for rakhis made of water hyacinth. Handicrafts made of the plant are also in great demand from the overseas market, where a bag made of it fetches about Rs 2300," he added.