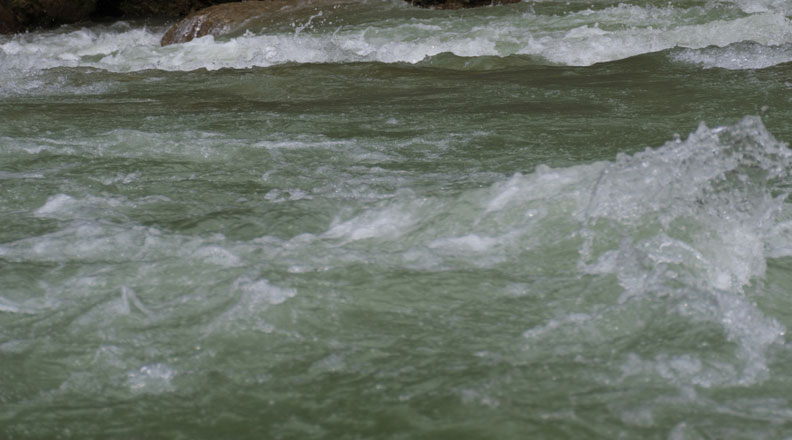 A 12-year-old boy who was swept away by the water of a gushing stream from a locality in Kalimpong on Wednesday evening has not yet been found, said sources.
Representational image from Shutterstock
Our Bureau   |   Siliguri, Darjeeling   |   Published 07.08.20, 06:07 AM

A sudden storm accompanied by torrential downpour disrupted life across the hills from Wednesday afternoon to late Thursday morning.

Sources at the Regional Meterological Office in Calcutta said that in the past 24 hours, that is till 8.30am on Thursday, it rained 130mm in Kalimpong and around 100mm in Darjeeling.

Because of the downpour, numerous small hilly streams and drains have suddenly swelled across the region.

A 12-year-old boy who was swept away by the water of a gushing stream from a locality in Kalimpong on Wednesday evening has not yet been found, said sources.

The schoolboy, Allah Rakha, a resident of Bhalukhop in Kalimpong, was standing near his home on Wednesday evening. Suddenly, the water level of the Malikholajhora, a hilly stream that ran near his home, rose. The boy was swept away. The administration’s hunt for him has not been successful yet, triggering panic in the area.

On Thursday, authorities of Kalimpong municipality took up the onus to clear waterlogging in various parts of the town.

“There is waterlogging in many parts of the town because of the heavy rainfall. This has also bared the ignorance of a section of people who have built houses and other buildings that encroach on the town’s drainage systems. In ward 3 of the town, for instance, there was a flood-like situation and water had entered shops and houses. This happened only because the drains were choked with pipes, clothes, furniture, stones and boulders. There was no space for rainwater to flow out,” said a source from the municipality.

He added: “Let this be a warning call for the town’s residents that we have to ensure that drains do not remain blocked and people should stop treating drains as trash cans for discarded items.”

Rainfall was accompanied by a storm that uprooted a number of trees throughout the hills. The fallen trees in turn, snapped electricity distribution cables in Darjeeling town and in suburbs like Ghoom, Bijanbari, Takdah and Lodhama.

“Most power transmission lines got affected as uprooted trees or broken branches fell on the cables. In all, there were eight power substations where power supply was disrupted. Work started from Thursday morning and we hope power will be restored in due course,” said an official of the Darjeeling district administration on Thursday morning.

From afternoon onwards, power supply started resuming and became normal by evening in most areas.

Weathermen said that the hills and some other areas of north Bengal and the neighbouring state of Sikkim would experience heavy rain during the next couple of days.

“Southwest monsoon is active over the region. There is a forecast of heavy rain or thundershowers in some places of Sikkim and Bengal during the next few days,” said a source.