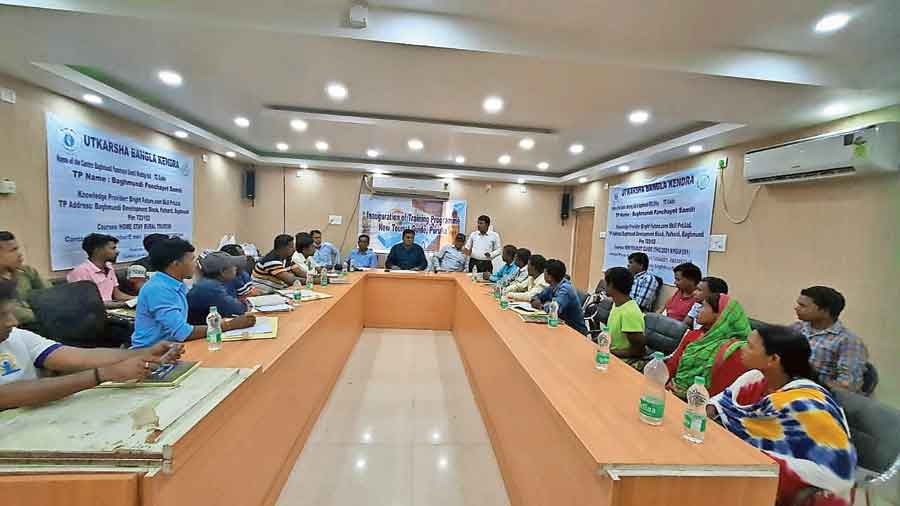 A training programme underway at Baghmundi in Purulia for the tour guides.
Biswanath Roy
Abhijeet Chatterjee   |   Durgapur   |   Published 11.07.22, 01:40 AM

The Purulia district administration has taken up an initiative to train jobless youths to work as guides for tourists.

Officials said that this initiative, taken up under the Mamata Banerjee government-led Utkarsh

Utkarsh Bangla is a vocational scheme under the West Bengal Society for Skill Development to train unemployed youths to generate income.

The administration recently ended the first phase of training for 30 youths, mostly natives of tribal areas in Baghmundi block of the district. It has also opened a Tourist Information and Assistance Centre in Baghmundi where the trained youths will be engaged to work as tour guides.

The administration in March  had sought applications from  unemployed youths to work as tourist guides, with prerequisites including Madhyamik.

“We have completed training for 30 youths in the first phase. The rest of the applicants will be trained in the next phase. The training programme will continue for a month,” said Debraj Ghosh, block development officer of Baghmundi.

The administration has engaged a private agency to train youths on courtesy and politeness while speaking with tourists, as well as in communication skills in Bengali, Hindi and English.

“The training for tour guides includes know-how on the geographical, geological and historical significance of the tourist places in the district so that the youths can explain these and guide the tourists properly," said Ghosh.

A stretch of the Ayodhya Hills, one of the popular tourist spots in the district.
Biswanath Roy

Purulia, once a Maoist stronghold, has emerged as one of the popular tourist destinations in south Bengal since the ultra-Left activities ceased in this Jungle Mahal district.

The district has recorded a steady growth in tourist footfall over the past three years.

Over 5-lakh tourists visited the district only in December last year. This year, because of the Covid-19 related restrictions, tourists were unable to visit Purulia in January but since February the flow of tourists has resumed steadily.

“Tourists come here mostly in winter but also come during Palash Utsav in March, when the palash trees are in full bloom..

The tourist footfall is also good every weekend and during the Durga Puja holidays,” said a source.

A number of tourist spots are located across the district.

Among them, the scenic Ayodhya Hills with an altitude of over 2,200 feet, is the most visited spot by tourists in winter.

Several private homestays, resorts and government-run hotels have come up on the foothills and the hilltop.

The administration will upload the names and phone numbers of all the trained tour guides on the district’s website.

The remuneration for the guides is yet to be finalised.

However, sources said it will not be less than Rs 300 per tourist group.

Baghmundi block apart, the administration will set up more tourist information and assistance centres in Purulia in due course.

An official said that having tour guides will also ease certain practical inconveniences.

“For instance, many tourists are unaware of the road conditions and sometimes proper routes to reach their destinations. So they face harassment. Once they book a guide, this problem will be solved," said an official.