We want children from class one to eight be given musur dal regularly conforming to their health requirements, says Headmaster of upper primary school in Purba Medinipur 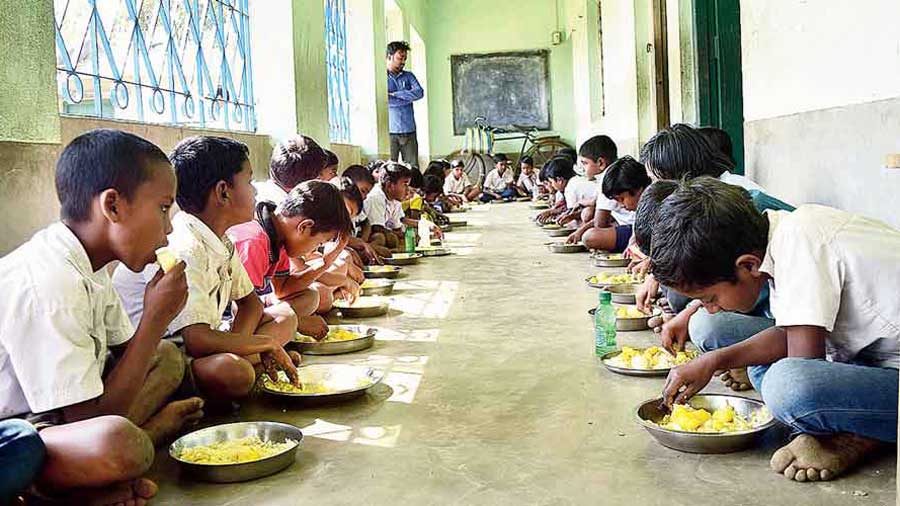 Primary and Upper Primary schools in Bengal are finding it difficult to serve midday meal to students due to hike in prices of essential commodities
File picture
Our Bureau, PTI   |   Calcutta   |   Published 22.04.22, 03:35 PM

Primary and Upper Primary schools in West Bengal are finding it difficult to serve midday meal to students due to hike in prices of essential commodities, according to authorities of different schools in districts.

The Bengal Primary Teachers' Association has drawn the attention of the School Education Department to the issue and demanded the present midday meal allocation of Rs 4.97 for every student at primary level and Rs 7.45 for every student at upper primary level be raised so that the midday meal menu is not tinkered with for the children and their nutritional aspects are not compromised.

Headmaster of an upper primary school in Purba Medinipur district Ananda Handa told PTI on behalf of the association "we have to tinker with the menu like introducing egg curry or boiled egg for one day in a week unlike twice in past. However, management of various schools are sticking to the diet of dal, soybean, mixed vegetable, boiled potato as we don't want to compromise on the issue of the health of our children."

The teachers have to bear the expenses from their pockets during crunch situations many a time, he said.

Handa said a large number of students are coming to schools after the campuses opened once the pandemic phase ended and they are facing the prospect of being deprived of the specified midday meal menu due to the price spiral of essentials.

"We want the children from class one to eight be given musur dal regularly conforming to their health requirements," he said.

An education official said 83,945 schools having 1,15,82,658 students are provided with free cooked midday meal every day and there has been no report about the midday meal project being affected since it resumed two months back after two year break. In the last two years, due to pandemic, packets of rice, soybean, dal used to be distributed among parents of students from respetive schools on a particular day.

Firoza Begum, Headmistress of a primary school in Murshidabad district, said "we are still maintaining soybean for three days and egg one day routine with difficulty. It is difficult as the price of an egg is between Rs 5.50-6 and we are trying to adjust without compromising food nutrition part. We have to buy potatoes at a price of Rs 15/kg minimum up from Rs 5/kg in the pre-pandemic days."

She said the midday meal is more essential for students from disadvantaged backgrounds in rural areas and they have made representation to local BDO office about the situation turning difficult.

A teacher of a Malda school, not wishing to be named, said "we are being forced to inflate the number of students present. Say there are 100 students in a class and 80 are usually present. To ensure the children do not miss their usual quota of meal, we are sending requirements for 90 students."

However, Headmaster of a primary school in South 24 Parganas district Rathindranath Das said "there had not been any change in the menu of children in our school in last two months. Egg is being given as usual. But there has been a strain in the costing and expenses which has shot up a bit."