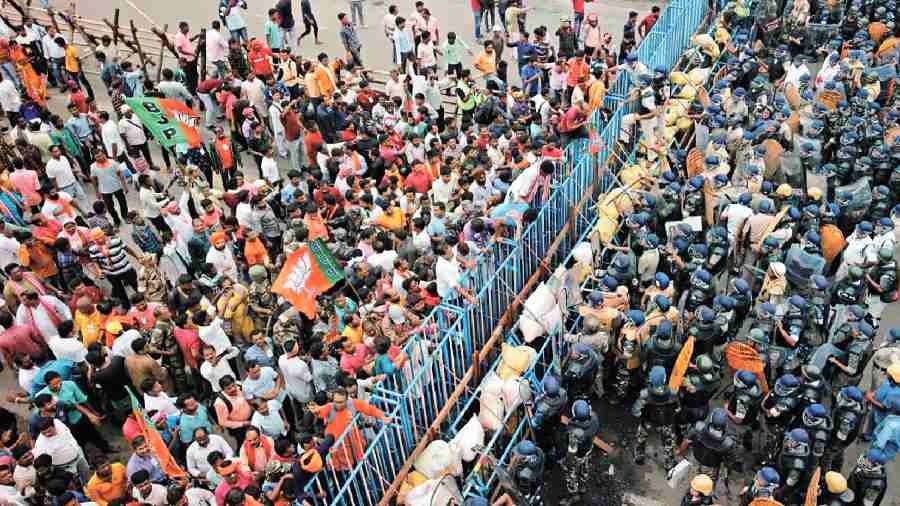 BJP supporters crowd near the barricades set up by the police at Santragachi in Howrah on Tuesday
The Telegraph
Our Bureau   |   Calcutta   |   Published 14.09.22, 02:45 AM

The BJP’s much-hyped Nabanna Abhiyan or march to Nabanna on Tuesday to protest against “corruption of the Trinamul regime” ended in a whimper even as the saffron camp claimed the show’s success and accused the ruling establishment of stifling democracy by using police to thwart a “spontaneous” movement.

The BJP had given a call for a march to Nabanna, the state administrative headquarters, to protest “corruption in all spheres” and billed the event as the first major movement to wrest the seat of power in Bengal from Trinamul. Over 2 lakh people were supposed to march in three rallies — each starting from Howrah Maidan, College Square and Santragachi — towards Nabanna.

The much-hyped plan, for which people from across the state were supposed to be brought to Calcutta, went awry in the face of unprecedented police bandobast even as different parts of the city witnessed sporadic clashes between the BJP supporters and men in uniform.

The BJP leadership put up a brave face and claimed the event a success. “This was a people’s movement and the people are happy. The BJP is also very happy with the way the event rolled out,” said the state BJP chief spokesperson, Samik Bhattacharya.

The police had not given permission to the event.

The BJP claimed the police bandobast proved Trinamul was jittery. The saffron camp claimed that 300 of its supporters had to be hospitalised because of police brutalities.

The state government did not give details of the number of cops injured.

BJP insiders admitted that the crowd count was well below 50,000. “We could have put up a better show as around Rs 10 crore was spent on this event.... I wish our leaders had coordinated among themselves and drawn up a proper plan,” said a source.

The mistrust among the BJP leaders — a main reason for factionalism in the party in Bengal — was evident on Tuesday as the top state leaders went about the march as individuals, not soldiers of a united force.

The poor coordination was even more striking in the backdrop of the fact that state unit chief Sukanta Majumdar, leader of the Opposition Suvendu Adhikari and national vice-president Dilip Ghosh — who were supposed to lead rallies from three points — held a “coordination meeting” at Majumdar’s residence only on Saturday, along with general secretaries of the state unit.

“They met to discuss the strategy just 36 hours before the show.... What more can you expect?” asked an insider.

Several BJP insiders said that leaders didn’t strategise how to dodge the cops and create maximum impact in the state capital on a day chief minister Mamata Banerjee was away.

A source said Majumdar routed one of the three special trains, which the BJP hired to bring supporters from north Bengal, to Howrah although the original plan was to terminate it at Sealdah station.

“People arriving at Sealdah were supposed to join the rally from College Square to be led by Dilipda. Sukantada probably wanted to show his prominence by having more people around him... This is why he requisitioned the train from Balurghat be routed to Howrah,” this source said.

Majumdar, the Balurghat MP, led the rally from Howrah Maidan.

Adhikari, who was supposed to lead the rally from Santragachi, couldn’t create much impact as his outing on a rain-soaked morning cut short by the police.

On his way to Santragachi to lead the rally, Adhikari, with MP Locket Chatterjee in tow, was stopped by the police near the Police Training School at Alipore. After a brief altercation with the police during which he compared Mamata with North Korean ruler Kim Jong-un and shouted slogans, he was out of action as the police took him away to Lalbazar.

“Was he expecting that the police would give him a free way to Santragachi?” asked a BJP insider.

“We had a decent gathering at Santragachi... Had he done some planning and reached the venue in advance, there would have been some impact.... It was clear there was no planning.”

The reasons behind Adhikari’s feeble presence on the protest day, seen as the first major event of Majumdar, were discussed in hushed tones in BJP circles.

A source said the Nandigram MLA, with a history of combative politics, gave in to the police on Tuesday without much resistance. “He was seen shouting at police for using women of the force to stop him..... His comment on why these women were touching him looked hilarious on television,” said a source.

Ghosh, known to be outspoken, was equally unimpressive as the rally led by him disintegrated within minutes of facing resistance near Howrah Bridge. A source said that Ghosh was not seen after the police used water cannons.

“His image of a strong leader was missing...,” said a source.

BJP insiders said that although the event did not create much impact other than scenes of violence on streets, the state leaders would trumpet it as a success and send reports to the central leadership congratulating themselves.

“The visuals will help them establish government atrocities.... But if an Opposition party has people’s support, can it be thwarted by police?” asked a source.

He said the tendency to bombard the media with details before the event was “naive”.

“We spoke more before the event.... Our leaders detailed everything, like hiring of trains, route maps of rallies and other details, to the media well in advance.... It helped the cops in planning. We had a naive approach and the entire programme didn’t leave any surprise element for the cops,” said a source.

A source cited another instance of “inexperience”, saying Majumdar had planned to reach Howrah Maidan on Tuesday morning.

“He had no idea that the police would block Howrah bridge by then. On the suggestion of some others, he decided to reach Howrah in the wee hours of Tuesday. If he had not been asked to leave early, he would have never reached Howrah Maidan,” the source said.

Some BJP insiders wanted to know about the absence of Tollywood stars like Roopa Ganguly, Parno Mittra and Rupanjana Mitra and others on whom the party had banked to expand its organisation.