Price of one litre petrol crosses Rs 100 in north Bengal

In the Darjeeling hills, the rate is always higher by Rs 2 to Rs 2.5 as compared to Siliguri, courtesy the transport and shrinkage charges 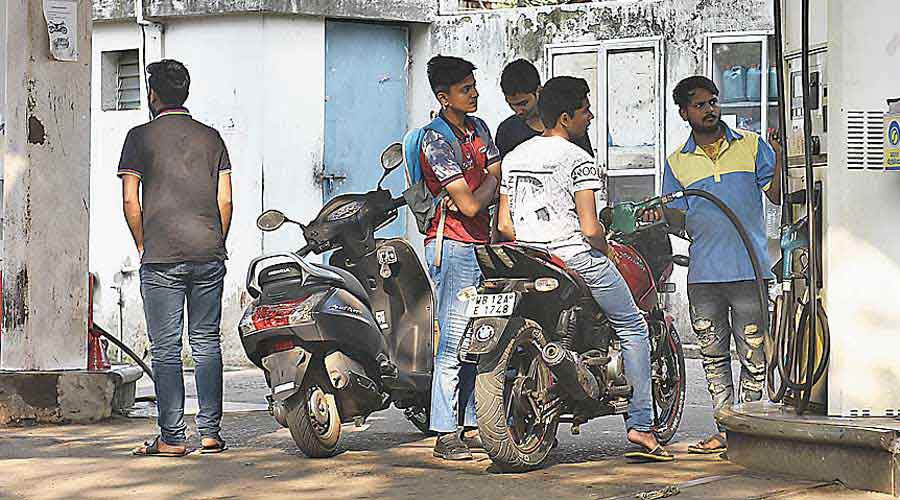 Motorists were paying as much as Rs 100.10 a litre on Friday in Cooch Behar, Alipurduar and some parts of North Dinajpur district.
Telegraph picture
Sambit Saha, Avijit Sinha   |   Calcutta, Siliguri   |   Published 03.07.21, 02:02 AM

Motorists have started to shell out over Rs 100 for one litre petrol at some north Bengal towns, following many other parts of the country where the fuel had already breached the three digit mark.

The price crossed Rs 100 in Cooch Behar, Alipurduar and some parts of North Dinajpur district fort the first time on Friday. One litre petrol was sold at Rs 100.10 at those places.

Prices at the retail pumps of public sector oil marketing companies in Calcutta are still below the Rs 100-mark. The city recorded Rs 99.04 a litre at the Indian Oil Corporation outlets on Friday.

Oil companies are allowed to mark up petrol on account of transport cost if the fuel is hauled to distant places. As a result, prices differ from one location to another even within a state despite the fuel being subjected to the same amount of central and state levies.

In the Darjeeling hills, the price of one litre petrol is always higher by Rs 2 to Rs 2.5 as compared to Siliguri, courtesy the transport and shrinkage charges.

“Petrol price had crossed the 100 rupee mark in Darjeeling on June 29 when it was Rs 100.16 a litre then. Today’s rate, however, is highest,” said a petrol pump owner in Darjeeling.

The common man is bearing the brunt of surging oil prices which are increasing the cost of commute as well as general merchandise.

“These days, petrol prices are increasing every day, so are the prices of diesel. Usually, I travel around 90km every day for my job and the daily fuel expenses have shot up. On the other hand, the rise in the diesel price is leading to an increase in the prices of various commodities,” said Raj Roy, who works in the pharmaceutical sector and is based in Cooch Behar.

Oil industry observers say petrol may cross the Rs 100-mark in Calcutta soon if the Narendra Modi government declines to intervene. So far, it has shown no desire to do so and instead, called on states to cut local taxes.

Bengal did walk the talk and cut prices of both petrol and diesel by Rs 1 a litre on February 22 ahead of the Assembly elections. The rebate, which had been in place till June 30, has been extended for another three months.

The Mamata Banerjee government imposes 17 per cent and 25 per cent sales tax on diesel and petrol, respectively on ad valorem basis. Additionally, it used to imposes a cess of Rs 1,000 per kilo litre or Re 1 a litre on both the products. Now, no cess is being imposed on these fuels in the state.

In contrast, the Centre collects Rs 32.90 from one litre petrol and Rs 31.80 from one litre diesel. However, it does not share the majority of the levies with states according to the formula of devolution of the central taxes.

The Centre bypasses the states by imposing cess, which stood at Rs 20.50 a litre on petrol and Rs 22 a litre on diesel, accounting for 62 per cent and 69 per cent of the central tax collection respectively.

In other words, the Centre keeps the majority of the tax collected from these two fuels for itself.

There has been a clamour from Opposition parties to slash the cess or the duties which were imposed to reap the gain from falling international crude oil prices, which also dictate, apart from central and states levies, how much Indians pay for the fuels.

India imports over 80 per cent of the domestic crude oil requirement.