Para teachers are on a week-long protest, demanding the same pay scale as that of full-time teachers 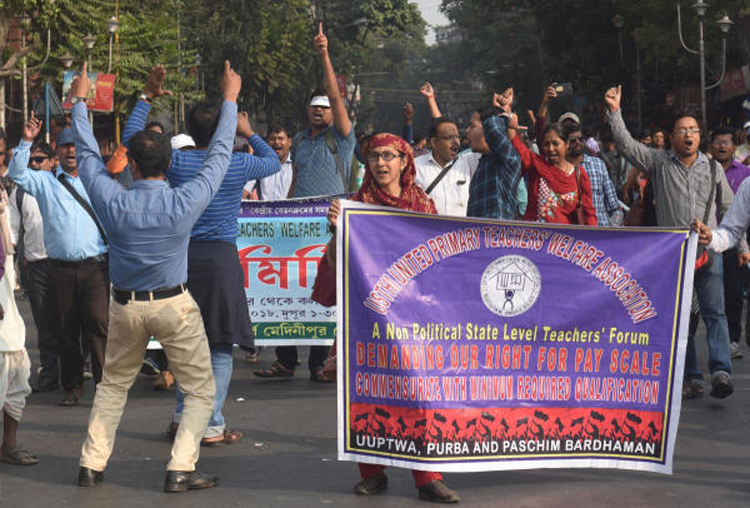 Close to 5,000 para teachers of state-aided schools sat on footpaths near Bikash Bhavan in Salt lake on Monday demanding the pay scale of full-time teachers.

Three-hundred of the protesting teachers sat on footpaths within 100m of Bikash Bhavan, while the rest sat on the footpath in front of Central Park, some distance away.

The teachers split into two groups because Calcutta High Court had on Sunday said the 5,000-odd protesters could not sit in front of the education secretariat. The court had allowed only 300 on the footpath 100m from Bikash Bhavan. The footpath near Central Park was allotted for the rest.

All the 5,000 had wanted to stage their protest in front of Bikash Bhavan. They moved the court when police refused them permission.

The court on Sunday had said protesters would not be allowed to sit on the main road. The court issued directives to avoid traffic disruption in the area, which has many government offices and leads to Sector V, the state’s IT hub.

Para teachers were appointed between 2007 and 2009 before the implementation of the RTE (Right to education act), which mandated that all children aged between six and 14 would be covered under the school education system.

The government implemented the act in 2013 but had started recruiting schoolteachers a few years earlier when it expected a surge in the number of students.

After the implementation of the RTE act, the government claimed the target of bringing children aged between six and 14 under the school education system had been fulfilled.

Para teachers continued to work as full-time teachers in schools. Their salaries were gradually raised to Rs 10,000 at the primary and Rs 13,000 at the upper primary levels.