Paintings tell a story of protest and hope 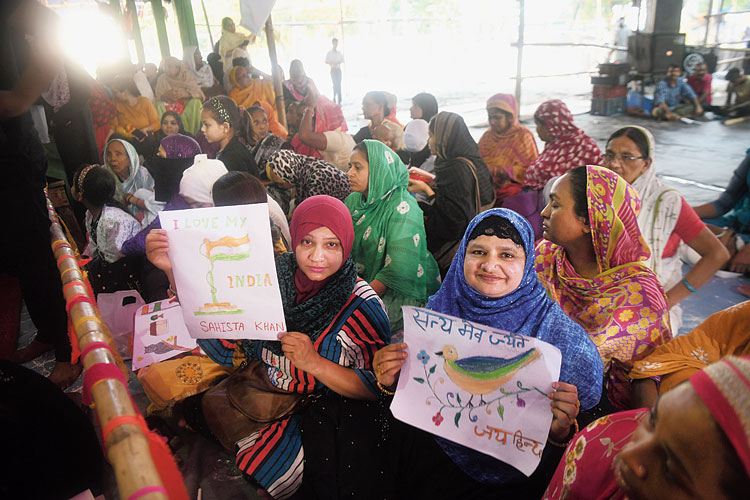 Truth alone Triumphs, is what 42-year-old Razda Khatoon (in blue) from Topsia said after she finished her painting. She had picked up a paintbrush almost after 20 years because she felt the message of peace could be communicated through art.
Jhinuk Mazumdar   |   Calcutta   |   Published 04.03.20, 08:55 PM

Students, women who picked up a paintbrush after almost two decades and professional artists converged at Park Circus Maidan on Wednesday evening and expressed their fears, concerns and hopes through art.

Not all who sat down to draw were good at it but each of the paintings had a story to tell. The art camp called Art Attack started on Wednesday evening on the ground at Park Circus where women have been sitting for close to two months to register their protest against the amended citizenship regime.

Razda Khatoon, 42, who has been coming to Park Circus regularly from Topsia after completing household chores, attending to her aged in-laws and cooking for her children, chose to speak with colours.

“The last time I drew was when I was in school. Today, I wanted to draw again to send across the message of peace and Satyameva Jayate (Truth alone triumphs). So many of us are sitting here day after day. Ultimately, it will be the victory of truth alone and we will win this battle over lies,” the homemaker said.

Filmmaker and illustrator Saswata Mukherjee (right), 26, made a painting to depict how women are bringing down fascism. “It is the women who are protesting in Delhi and Calcutta and also other places. It is ironical how one of the leaders, instead of acknowledging their presence or answering their questions, is dedicating his social media accounts to women.” Saswata’s twin, Susruta, also a filmmaker and illustrator, drew a sketch where “one of the leaders” is asking for documents but does not have the courage to show his own degree. “The situation in the country is such that we cannot celebrate the little pleasures of life because we are feeling guilty if we do that,” Susruta said.

Anam Zafar, a third-year law student of Calcutta University, showed Delhi burning and with it the Constitution. The falcon in her painting is the central government that is hunting down its people, represented through chicks. “We the baghs and baghinees (of Bengal) stand united against CAA and NRC. We are together and we will not accept this discrimination,” Anam said.

Mahwish Larib, a Class XI student, drew Santa Claus (one of the two leaders) asking for documents. In the same painting, Rabindranath Tagore is seen chained and being taken away by police for writing poems, including the national anthem of Bangladesh.

Class VI student Mozammil Ansari (left), 11, drew three sieves, representing the National Register of Citizens, National Population Register and the Citizenship Amendment Act. The sieves filter people. After passing through the three layers of sieves, Muslims go to a cage and the rest go to a separate citizenship box. Mozammil had initially not thought of drawing anything. He had come along with his sister, Mahwish Larib, 15 (right). Seeing him sitting idle, Mahwish suggested that he too take up a pen.
Pictures by Bishwarup Dutta

It was the resolve of many like Razda that fashion designer Sarfaraz Nawaz, 36, depicted in her painting.

Sarfaraz, who has been part of the protest at Park Circus, painted a “dabang dadi (fearless grandmother)” sitting on a dharna and saying: “Nahin hatenge (We will not move)”, a message that he wants to convey through his painting.

Many of the children who have been accompanying their mothers to the protest ground day after day took to painting on Wednesday to spread the message of unity and peace — their way of protesting the amended citizenship regime, which has been the talking point in all their homes.

The paintings will be put up in one corner of the ground.

Sazia Shahid, 17, drew a map of India with protests all over the country. Two hands coming together in a bond of friendship stood for hope in Sazia’s painting.

“One of my classmates one day said that Muslims should be asked to leave the country. I was very upset. But then the teacher, who is Hindu, explained to him that people of all religions have always lived together in India and all of them fought together for the country’s freedom. There is hope still, even in the midst of so much unrest,” the Class XI student said.

Sayantan Maitra, an art curator, was there to see the artworks. “Many of the artists are shying away from what is happening now. But this kind of an art camp will give rise to a new generation of artists who will use colours to communicate their thoughts,” said Maitra.