Over 4,000 evacuated from Yaas-hit islands amid high tide warning in Bengal 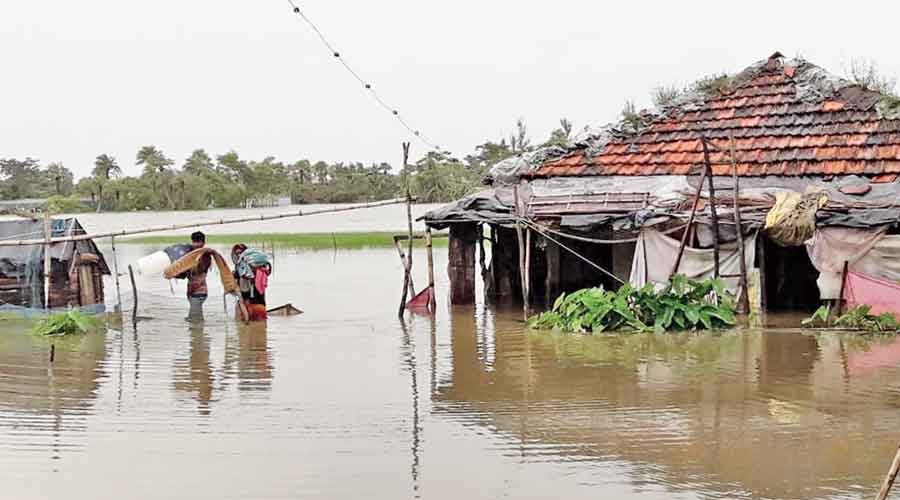 More than 4,000 inhabitants of cyclone Yaas-hit Mousuni and Ghoramara islands in Bengal's South 24 Parganas district have been evacuated to safety following warning of new moon high tides on June 11 and June 26, a state minister said on Wednesday.

Around 3,000 people from Mousuni Island and 1,100 inhabitants of Ghoramara have been shifted to different flood centres in the district, Sunderbans Development Minister Bankim Hazra said.

"So far, we have evacuated over 4,000 people from these two islands but more people need to be moved as per Chief Minister Mamata Banerjee's direction. Over 1,100 families live in Ghoramara and 3,200 in Mousuni," he told PTI.

Mamata had directed the district administration to evacuate residents of the two islands where embankments were ravaged by cyclone Yaas on May 26 and repairs would not be completed before June-end.

"The Irrigation Department is trying to complete the repair work," he said.

Hazra expressed hope that high tide waters will not enter coastal areas like Dhobal and Shibpur but may inundate parts of Gosaba, Kultuli, Patharpratima, Frazerganj, Noapukuria, Iswaripur and Narayanpur on June 11 as repairing of embankments are yet to be completed in those areas.

"I will be holding a meeting with senior officials of the Irrigation and Panchayat departments and SDOs, BDOs and the police administration to chalk out a plan," he said.

Mamata had earlier said that there have been breaches at river embankments at 317 places, most of which will be repaired by June 21 barring a few in Sagar and Mousuni islands, work for which will be completed only by June 31.

Hence, nearly 20,000 people will have to be evacuated before the coming high tides, she had said.