Victim was studying for MBA 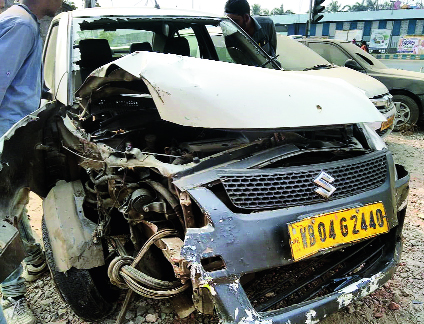 The mangled Swift Dzire that climbed a divider, hit a lamp post and rolled over at the Metropolitan crossing of the EM Bypass on Wednesday Morning
The Telegraph picture
TT Bureau   |   Calcutta   |   Published 10.01.19, 12:05 PM

A young employee of the multinational consultancy PricewaterhouseCoopers (PwC) was killed and two of his colleagues injured when an office pool car ferrying them to Sector V on Wednesday morning mounted a road divider at the Metropolitan crossing of the EM Bypass, hit a lamp post and rolled over before sitting on its roof.

Police suspect the driver, who was also injured, had dozed off at the wheel of the Swift Dzire.

Sudip Chakrabarty, a 32-year-old senior associate with PwC, was declared dead on arrival at Apollo Gleneagles Hospitals, around 3km from the accident site.

His colleague Ansuman Dey, 33, underwent surgery in the evening and needed 20 stitches for external head injuries. Dhritiman Ghosh, 36, fractured an arm but did not require hospitalisation.

Ajay Roy, the driver, is in the observation ward of Apollo with multiple injuries.

The deceased was an engineer from Alipurduar in north Bengal. According to his LinkedIn profile, he had studied at the Institute of Jute Technology before enrolling for the evening MBA programme at the Indian Institute of Social Welfare and Business Management (IISWBM) in central Calcutta. He was three months away from completing the course.

The police quoted eyewitnesses as saying that the car taking Sudip and two other PwC employees to Sector V swerved right and climbed the divider before toppling on the Ultadanga-bound flank of the Bypass near Chingrighata around 7.30am.

“Some traffic cops and commuters waiting for transport pulled out the passengers from the mangled vehicle,” an officer at Pragati Maidan police station said.

Ansuman had been the first to be picked up by the pool car from his house in Haridevpur. Sudip got in at Kudghat and Dhritiman at Bansdroni.

“Ansuman was in front and other two in the back seat. He was the only one wearing the seat belt,” a traffic officer said. “Passengers in the back seat of a car hardly wear seat belts. Ansuman might have escaped a fatal injury because he was wearing his seat belt.”

Ansuman and Dhritiman told the police that the road was empty when the accident occurred and that there was no apparent reason for the driver to swerve right.

In his statement to the police, Ajay claimed that the three PwC employees had been forcing him to drive fast by saying they were late for the morning shift.

Sudip’s classmate at the IISWBM, Kaustav Roy, described him as a sincere student and very helpful person. “He was working very hard to complete the course. Only three months were left….He was at the institute last on Tuesday.”

Evening classes were suspended on Wednesday after news of Sudip’s death reached the campus.

Sources at PwC said Sudip had lost his mother several years ago and was staying with his sister in her Kudghat house. They said he was efficient in his work and friendly with colleagues.

A doctor at Apollo said no internal head injury showed up in CT scans on Ansuman and the driver. “Ansuman came in with deep cuts above the forehead, for which he needed 20 stitches. He also dislocated two fingers of his left hand. Ajay has head and arm injuries but no fracture.”