Advertisement
Home / West-bengal / Nov 5: With EC holding the bypoll card, where does it leave chief minister Mamata
Who else but Didi? Trinamul agog

Nov 5: With EC holding the bypoll card, where does it leave chief minister Mamata 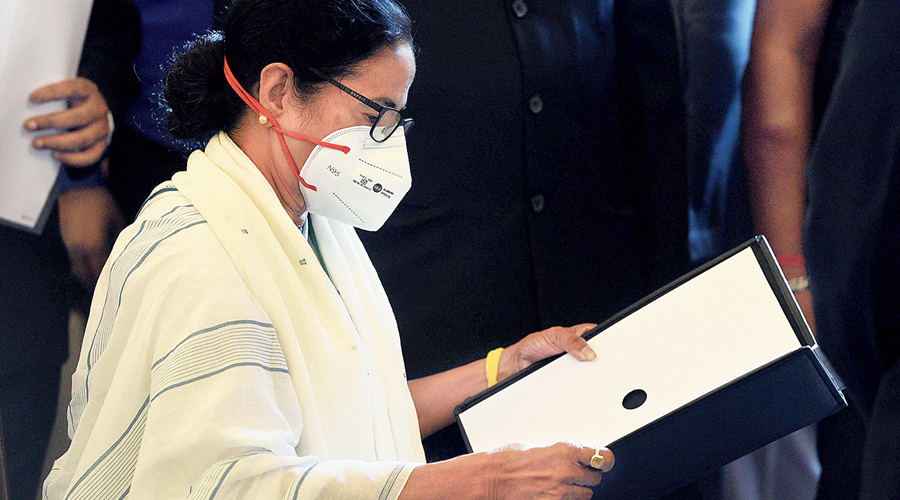 For the last few days, everyone in the Trinamul is talking about November 5, the deadline for Mamata Banerjee to be elected to the state Assembly to remain chief minister, with the party's rank and file dwelling on the immediate future.

What if the election commission of India doesn't announce by-elections by then?

Since Mamata lost to the BJP’s Suvendu Adhikary from Nandigram in the Assembly elections, she has time till November 5 to get elected to the Assembly.

For that to happen, the election commission must announce the date for holding by-elections --  as of now,   seven Assembly seats in Bengal are without elected representatives.

In Murshidabad’s Shamshergunj and Jangipur, elections could not be held along with the rest of the 292 seats because of the deaths of two nominees in the respective seats. Vacancies have come up in five other seats — Dinhata, Santipur, Bhabanipur, Khardaha and Gosaba — caused by either deaths or resignations.

According to  Article 164 (4) of the Constitution: “A minister who for any period of six consecutive months is not a member of the Legislature of the State shall at the expiration of that period cease to be a Minister.”

Mamata has expressed her displeasure over the Election Commission's reluctance to hold the Assembly bypolls multiple times in the last few months.

“They held the Bengal assembly elections in eight phases when the Covid-19 positivity rate went up to 33 per cent. Now, when it is down to three per cent, they cannot organise the bypolls,” Mamata said while interacting with newspersons on Monday.

Many within the Trinamul see the reluctance of the election commission as a fallout of pressure from the ruling BJP which is using the excuse of Covid to delay the by-elections.

While the chief minister’s claims on lower Covid numbers are true, the state government has done a lot to cut down most restrictions to allow the local economy to flourish. While public transport has been allowed to function, there is still a bar on running local trains. Educational institutions are yet to open.

Between August 24 and August 26, the number of new cases has jumped from 613 to 717. No one can predict how the Covid situation will unfold in the coming months when more relaxations are allowed.

In such a scenario, BJP leaders of Bengal are advocating a solution that no one in the Trinamul dares to even think about.

Who else but Didi?

“What’s the problem? She can step down once and give a chance to the 213 MLAs (a couple of them have died in recent months) who actually got elected. In Uttarakhand a  BJP-ruled state a non-MLA chief minister has resigned,” said Dilip Ghosh, Bengal BJP president.

Leader of the  Opposition Suvendu Adhikary, who has become the second person after CPM’s Malini Bhattacharjee to defeat Mamata in any election, said, “I don’t know if there is any other example of a losing candidate occupying in the chief minister’s chair in Bengal or anywhere else.”

For polls to be held in the seven seats,  the election commission has time only till the end of September. The following month of October is when the festive season kicks off in Bengal, and all things political are pushed off the calendar. And however desperate Mamata may be in getting her rightful chair in the Assembly, even a festive-minded chief minister like her would not like to disrupt the mood of voters of Bhowanipore or elsewhere.

“This is why we are actually counting days when the election commission will announce the dates. Otherwise, what is going to happen? Nobody has ever given a thought to anyone other than Didi occupying the chief minister’s chair from our party,” said a senior Trinamul leader.

The option of Mamata resigning and taking oath for another six months is bound to be frowned upon by the apex court. In a 2001 ruling,  the Supreme Court had rejected the re-appointment of Tej Parkash Singh, son of the slain Punjab chief minister Beant Singh, without being re-elected in 1995-96. It had also drawn attention to the late Tamil Nadu chief minister, J Jayalalithaa, who became chief minister despite having been disqualified to contest elections.

The Supreme Court is clear that no person can be reappointed for two terms without becoming a member of the legislature either as MLA or MLC. Bengal does not have a legislative council yet though the Mamata Banerjee government has initiated the process. It is unlikely the legislative council will come into shape by early November.

A section of the Trinamul feels in case she must resign even if for a few days, two of the senior-most ministers in the government --  both Mamata -- loyalists could take her place. The names of Subrata Mukherjee and Partha Chatterjee are doing the rounds. Mukherjee, a minister in the cabinet of S.S. Ray in the 1970s till the Emergency, has the drawback of being arrested by the CBI in connection with the Narada sting operation.

Chatterjee on the other hand has been moved from one ministry to another and so far has survived newly-appointed Trinamul all India general secretary Abhishek Banerjee’s one-man, one-post diktat. Chatterjee continues to remain a high-profile minister and also the secretary-general of Trinamul.

“There is no doubt Mamata di will win the by-election and return as chief minister. What will happen to the substitute in that case? After being a chief minister, can anyone continue as a cabinet minister? Everything is possible in our party. Whatever Mamata di says will happen,” said a Trinamul leader.