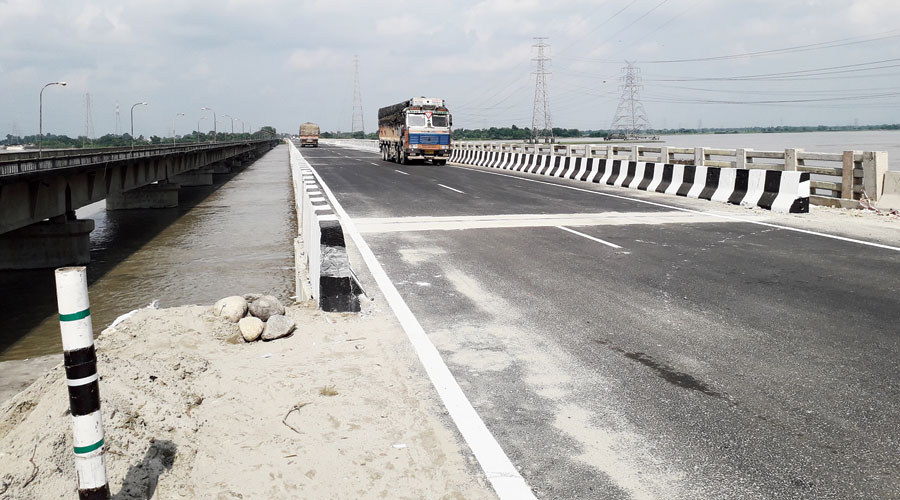 Road connectivity to the Northeast and parts of north Bengal became smoother and faster from Friday as traffic started moving on the second bridge on the outskirts of Jalpaiguri town over the Teesta river.

Built at a cost of Rs 70 crore, the new bridge is 1.05km long, 12m wide and rests on 24 pillars. It has a footpath on one side of the bridge for pedestrians, a separate track for two-wheelers and a two-lane road for vehicles.

The construction of the bridge started in December 2016 as a part of the east west corridor — a four lane highway that runs from Porbandar in Gujarat to Silchar of Assam.

The new bridge over the Teesta along NH27 has tremendous strategic importance, said Soumen Nag, a social researcher in Siliguri.

“This bridge will make road connectivity between the Indian mainland and the entire Northeast much faster and easier...This bridge was needed both for administrative and defence purposes,” Nag added.

In north Bengal, other than the old bridge parallel to the new bridge, there are two more bridges over the Teesta through which one can go to the Northeast.

One is in Sevoke (Siliguri) — the Coronation Bridge — through which heavy vehicles are not allowed to move as it is around 80 years old. The other is the bridge at Gajoldoba (Malbazar subdivision, Jalpaiguri) along the Teesta Barrage.

“The Gajoldoba one is also not fit for regular movement of heavy vehicles. That is why, even senior defence analysts time and again emphasised on the need for a new bridge over the Teesta so that no problems are faced in carrying heavy equipment and artillery via road to the northeast. It is good that the bridge has finally opened,” said a retired army officer in Siliguri.

On Friday evening, Moloy Kumar Das, the DSP (traffic) of Jalpaiguri, along with other officers of his department and representatives of the construction firm that built the bridge, started traffic movement on the bridge. “It has been done informally, but yes, the new bridge is operational,” said an NHAI source.

“Some jobs such as installations of lights are pending. Also, repair work of the old bridge and the approach roads will be taken up soon and will take around four months,” said the source in NHAI.

The opening of the bridge has come as great relief for people who travel on this route.

Even a few weeks back, as conditions of the approach roads to the old bridge deteriorated because of heavy rain, it took up to four hours for a vehicle to cross the bridge.

“We have allowed vehicles to move through the new bridge. It will reduce traffic congestion and can help in carrying out repairs of the old bridge,” said Das, the DSP (traffic).