Party had used the video, shot by the news portal Narada and titled X Files, to project Trinamul leaders as corrupt in the run-up to the 2016 Assembly polls 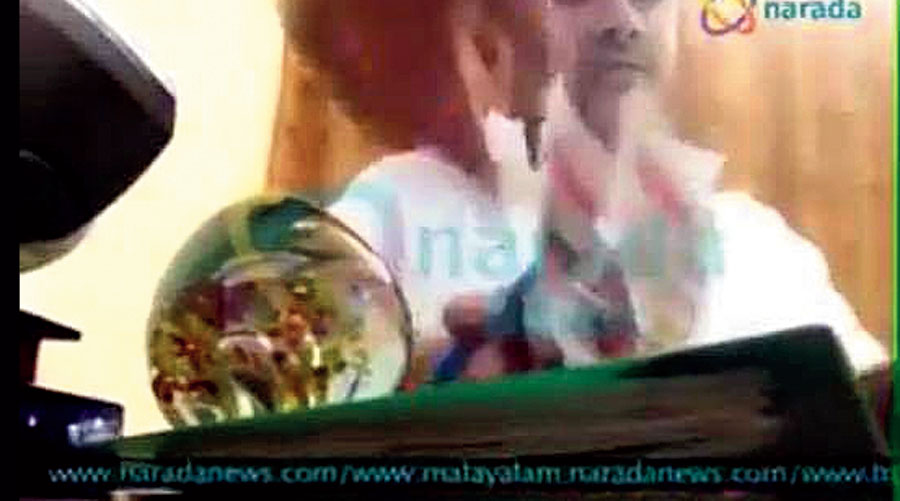 A screen shot from the Narada sting video that has been taken down from the official YouTube channel of the BJP
Arkamoy Datta Majumdar   |   Calcutta   |   Published 22.12.20, 03:33 AM

Three turncoats are a crowd — so much so that they have elbowed out the venerable Narada from a BJP platform.

A purported sting video that professes to show Suvendu Adhikari and others in what came to be known as the Narada cash scandal was removed from the BJP’s official YouTube channel on Sunday, a day after the former Trinamul minister switched sides in the presence of Amit Shah.

The BJP had used the video, shot by the news portal Narada and titled X Files, to project Trinamul leaders as corrupt in the run-up to the 2016 Assembly polls. Some of the figures on the video are seen accepting wads of currency notes.

The video was taken down after some social media influencers began sharing it since Saturday, highlighting the BJP’s double standard. For instance, Dhruv Rathee, a YouTuber with over 4 million subscribers, drew 39,000 likes when he tweeted images of the Narada screenshots from the BJP channel and pointed out that “both Mukul Roy and Suvendu Adhikari have now joined the BJP happily”.

Another Trinamul leader who features in the Narada tapes had joined the BJP earlier: former Calcutta mayor Sovan Chatterjee.

“I’ve no idea whether the video was ever there. Nor would I be able to say when and why it was taken down,” said Sayantan Basu, a BJP state general secretary.

Asked why the party had removed the video now, a senior BJP leader tried to suggest in private that the video had become unnecessary rather than a source of embarrassment.

“Isn’t it obvious that the video would no longer be on the channel? Suvenduda has been our biggest catch after Mukulda (Mukul Roy). What purpose does the video have any longer?” he asked.

What didn’t appear “obvious” was why it had not been taken down after Mukul and Chatterjee had joined the BJP.

Nor is it clear who took the decision to remove the video immediately after Suvendu came on board.

“Maybe the party’s central leadership has big plans for Suvenduda. Maybe the video was kept online just to keep reminding Suvenduda of the weapon we had,” the senior BJP leader said.

The video could be accessed from the Bengal BJP’s Facebook page on Monday night. But a list of the Narada accused on the FB page omitted the name of one Trinamul MP.

A BJP source said at least three Trinamul leaders accused in the Narada controversy were talking to the party.

The only Narada-related videos now available on the BJP’s YouTube channel are those of a rally addressed by Prime Minister Narendra Modi and a television interview of Union home minister Amit Shah. Both are seen accusing Trinamul chief Mamata Banerjee of sheltering corrupt politicians.

The Narada video became public on March 14, 2016, when it was screened at the state BJP headquarters in Calcutta. Siddharth Nath Singh, now a minister in Uttar Pradesh and then the party’s minder for Bengal, had held a news conference after the screening of the video.