Mother Teresa: The tiny nun with a large heart in blue-bordered sari

Saint of the slums with a universal message 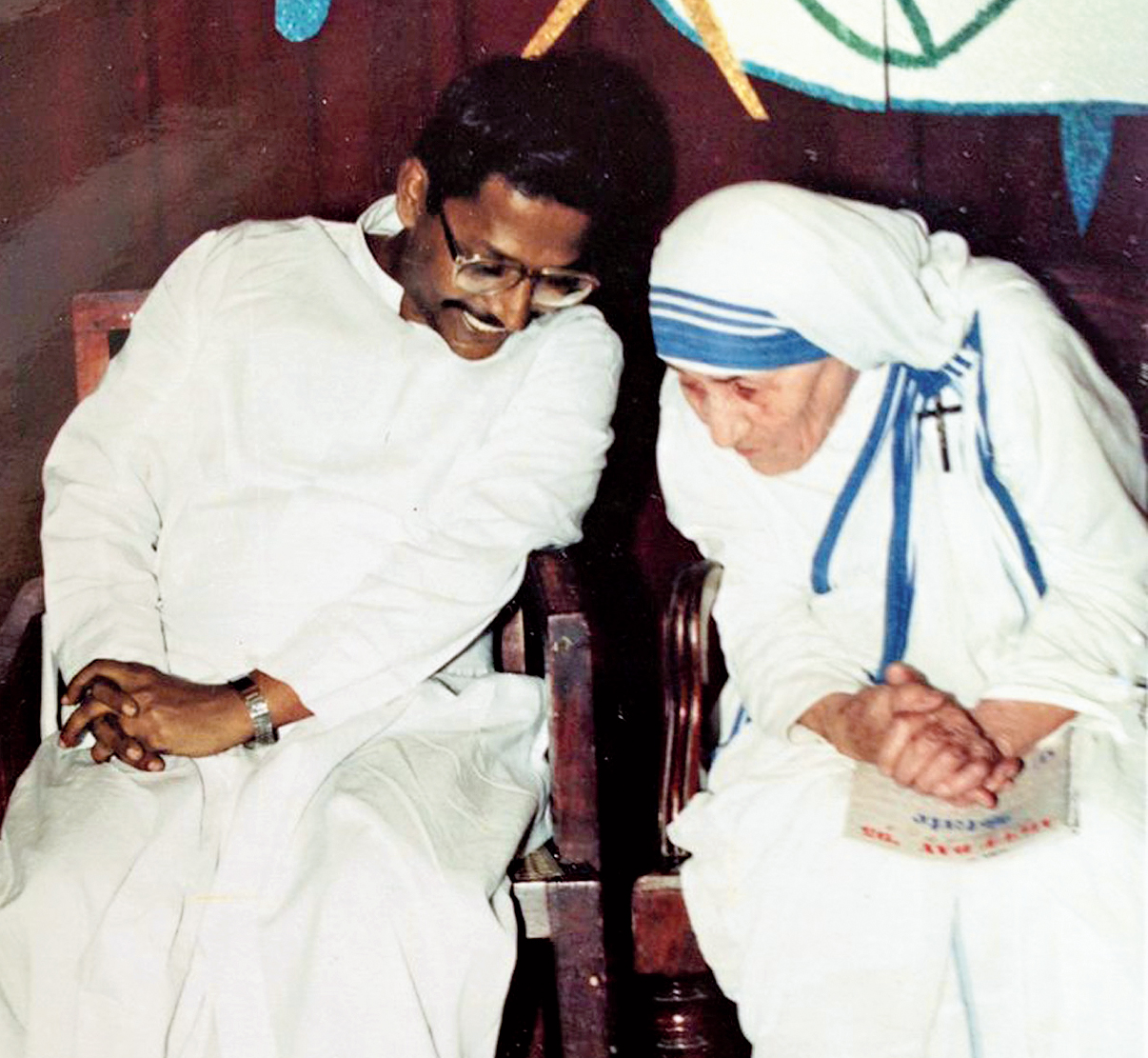 When I asked for her blessings in one of our meetings in 1994, Mother Teresa gave me a compassionate look and thrust a Rosary (a string of prayer beads) into my palms and said, “Pray for me and my work for the destitute and dying.” I discovered in this great lady the divine dispensation that reached the core of my heart. Every word she spoke, every touch and every look exuded a transformative tint.

Mother Teresa was misunderstood, for no proven reason — critics ignorantly blamed her as if she was working for conversion. The RSS chief Mohan Bhagwat had said in February 2015 that the prime motive behind Mother Teresa’s service to the destitute was converting them to Christianity, adding that her selfish aim devalued the virtues of a noble cause. “In the name of service, religious conversions were made.”

Subramanian Swamy, a senior BJP MP, had called for Mother Teresa’s Bharat Ratna award to be rescinded in July 2018 if the Missionaries of Charity group was found guilty… “I 100 per cent support it… We are not rubbishing the entire [Mission]. We are rubbishing the so-called ‘saint’ status of Mother Teresa,” Swamy had told the press.

Her biographer and the former Chief Election Commissioner of India, Navin B. Chawla, had once asked Mother whether she tried to convert people. “She replied, ‘Yes, I do convert. I convert you to be a better Hindu, a better Christian, a better Catholic, a better Sikh, and a better Muslim. When you have found God, it’s up to you to do with Him what you want’.”

Didn’t Judas, one of the Twelve Apostles of Jesus Christ, betray him for 30 silver coins? The Pharisees and the Scribes, whom Jesus called hypocrites, looked for a reason to accuse Jesus and put him to death. In her epic years as a missionary, Mother had not converted a single person to a particular religious faith. She converted many, to the communion of humanity, beyond considerations of parochial religious culture.

Her message is universal. No matter what religion a person belongs to, or even if they are atheists or agnostics, Mother Teresa’s message is to serve with love. Her mantra was, “We are all God’s children — we have been created for greater things, to love and be loved. God loves each one of us with an everlasting love — we are precious to Him. Therefore nothing should separate us”.

The tiny nun with a large heart in the blue-bordered cotton sari had first joined the Loreto Sisters at the age of 18. After training at their institutions in Dublin and in Darjeeling, India, she taught and served as principal at Loreto House, a renowned girls’ school in Calcutta. In 1946, while travelling in a train to Darjeeling, she received a “call within a call”, as she described it. “The message was clear. I was to leave the Loreto congregation and help the poor, while living among them,” she said.

In 1950, she founded in the slums of Calcutta a religious order with a small community of 12 members, which has grown to over 4,500 Sisters all over the world running orphanages, AIDS hospices, charity centres worldwide, and caring for refugees, the blind, disabled, aged, alcoholics, the poor and homeless and victims of floods, epidemics, famine and other natural calamities. Fifteen years later the Vatican recognised it as a pontifical congregation with the Pope’s blessings.

In 1952, Mother Teresa opened the Nirmal Hriday (Pure Heart) Home for Dying Destitute in a dormitory — attached to a Hindu temple dedicated to the god Kali. It is a shelter where the dying poor die in dignity. I had the opportunity to serve the inmates for a month forty years ago as a volunteer. Tens of thousands of people have been cared for in the home since it opened. Millions revered and venerated her as a saint.

Today, her congregation, the ‘Missionaries of Charity’, has opened over 700 homes in 136 countries, witnessing that faith could indeed move mountains. Even Fidel Castro, the Cuban leader, allowed her to undertake a mission in Havana in 1986; and in 1987 the Soviet Union agreed that she could send her nuns to work in Moscow and Armenia to care for earthquake victims. Mother’s spirit and work still continue in good faith under the leadership of Sr. Mary Prema.

The Jesuit Fathers of Calcutta have always been close to her and supportive of her work — the Fathers of St. Xavier’s College have always stood by her with great appreciation of her ‘vocation within a vocation’. Fr. Celest Van Exem was her spiritual director for many years and she never failed to meet him once every week for her spiritual guidance at St. Xavier’s. Fr. Edourad Le Joly was a writer who proclaimed her mission significantly with 21 books on her life.

Navin Chawla had once asked Jyoti Basu, the second longest-serving Indian chief minister for more than 23 years, what he and Mother Teresa could possibly have in common because he was a communist and an atheist and for her God was everything. He smiled and said: “We share a love for the poor.” In the beginning, when his workers asked him why he was supporting a Christian nun, he replied: “The day you can clean the wounds of a leprosy patient, on that day I will ask her to leave.” And that day never came.

Mother has inspired thousands of followers in several nations as well as individuals around the globe. World leaders have recognised her as an inspiration. She was one among us, one among the poor, dying and destitute. She identified herself with them. She demonstrated that a person could live a faith-filled life even when in agony or in doubt.

Mother was a symbol of God’s mercy for the poor and the marginalised of this world. Her life, from the beginning to its end, was profoundly holy. That is why Pope Francis declared her a saint on September 4, 2016, at St. Peter’s Square, Vatican City, in Rome in such a short period after her death. The Sainthood of Mother Teresa gives us an opportunity to follow in her footsteps and to reach out to the poorest of the poor in love and service. Mother had long been a saint. For us in Calcutta, she is the song of celebration, hymn of compassion. I believe the city of joy continues to shine in her holiness.

I have had a close association with Mother Teresa. On many occasions, I had brought her in touch with the youth of Calcutta. She was there with her characteristic smile, exemplary humility and a penetrating presence that created an atmosphere of prayer and veneration. She was always inspiring and every time she met the youth, she had a message of love for them.

Thirty years ago I had gone to Mother House to celebrate the Holy Eucharist for all her Sisters. Mother met me in the sacristy with a broad and radiating smile. She gently kissed my hands and knelt down for my blessings. I was nervous and said, “Mother, who I am to bless you! Instead you must bless me.” She looked at me with a gentle smile and said, “You are a priest, a newly ordained priest, a representative of Christ, and so I humbly seek your blessings”. I blessed her abundantly, and quickly knelt down and sought her blessings. It was an unforgettable and a transformative moment of my life.

It was part of Mother Teresa’s credo that God would provide the means that her work demanded. She would forbid her helpers to raise money in her name. It made no difference: the funds flowed in. Mother Teresa's reputation secured the admiration of world leaders, religious and secular alike. Neither impressed by, nor dismissive of their attention, she dealt with the mighty in the same friendly manner as she treated the dying and destitute.

When she was criticised for not using her considerable influence to attack systemic evils such as the arms race or organised exploitation and injustice, she simply responded that was not her mission, but one that belonged to others, the lay leaders. “Once you get involved in politics, you stop being all things to all people,” she said in an interview in 1982. “We must encourage the laypeople to stand for justice, for truth” in the political arena.

Mother was always bold and courageous. She took criticisms well, often answered them eloquently and marched ahead with all faith in Jesus for whom she did everything. She demonstrated that she is an instrument of peace in the hands of God.

Mother Teresa, who so sternly rejected the tinsel delights of this world, discovered that the world was determined to heap honours on her. Numerous awards, beginning with the Padma Shree in 1962, Pope John XXIII’s Peace Prize in 1971 in Vatican, and notably the Nobel Peace Prize in 1979, honoured her work, while an increasingly interested media began to follow her activities. She received both prizes and attention “for the glory of God and in the name of the poor”.

Mother believed that God is specially revealed in the mystery of the human person who is ‘created in the image and likeness of God’ — she probed the meaning of human life and arrived at the radical goodness that resides in every individual and connected herself with everyone with a sense of affability. “Not all of us can do great things, but we can do small things with great love.”

Mother Teresa was keenly aware that she was called to devote her whole energy and the energy of her followers to serve the poorest of the poor in their greatest need. Once a journalist asked her why she did not give a fishing rod to people to enable them to fish for themselves instead of giving them fish all the time. Her answer was that she was called to serve those who cannot stand and who would not be able to hold a fishing rod. Once they could stand, the journalist should help them to fend for themselves — this was not her work.

When I think of Mother Teresa, the image that I have of her is the universal Mother like the goddess Durga for the cultural connotation of the people of Calcutta. Undoubtedly, Calcutta made her first Mother Teresa and then Saint Teresa. She performed the mission of destroying the evil of poverty and inhumanity that does away with life and propagated peace of thought and purity of act. The permeating concord of human solidarity that spreads across Mother’s missionary journey of charity removed the emotional distance between people. Indeed, she healed our race.

Mother who was born Agnes Gonxha Bojaxhiu on August 26, 1910, in Skopje, now the capital of Macedonia, died at the age of 87 on September 5, 1997, in Calcutta, the city she made her own. The Indian government had declared a state of mourning for her and to the great surprise of the Western countries, honoured her with a state funeral. It is said, ‘every beginning has an end and every end has a new beginning’. Mother is not dead; such a life cannot have a foregone conclusion. She bridged the gap between life and death and her legacy continues to live in the hearts of her sisters and followers.

This August 26 is Mother’s 109th birth anniversary. I am fortunate and blessed to share my birthday with her. Her favourite words have always inspired me: “The fruit of silence is prayer; the fruit of prayer is faith; the fruit of faith is love; the fruit of love is service and the fruit of service is peace.”