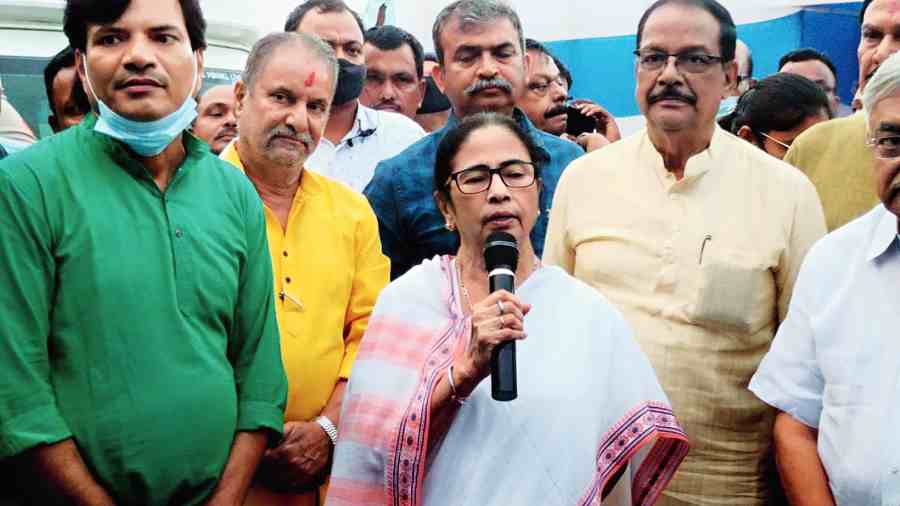 Mamata Banerjee on Sunday alleged that the Centre was “deliberately” withholding the release of Rs 6,500 crore under the rural job guarantee scheme as part of its “political dirty game”.

The chief minister said the Trinamul Congress would launch state-wide protests against the Narendra Modi government over the issue.

“The Centre has not released funds under the 100-day rural job guarantee scheme since December. This is what we deserve but the Centre is denying us the funds,” said the chief minister, who reached Durgapur on Sunday.

The chief minister’s allegation comes at a time the Centre has sought explanations from the state government over MGNREGA “anomalies” that were identified by national-level monitoring teams. The teams had visited the state last year. The Centre is also yet to approve Bengal’s labour budget under the MGNREGA for the 2022-2023 fiscal.

The Narendra Modi government is holding the release of Rs 6,500 crore — Rs 3,000 crore for wages and Rs 3,500 crore for material costs — following the state government’s alleged failure to answer queries related to expenditure under the employment scheme.

The chief minister said according to rules, beneficiaries under the 100-day job guarantee scheme should be paid their wages within 15 days of the completion of work.

“But the Centre is depriving the poor people of Bengal (of wages) and we will not accept it,” she said while speaking to reporters.

Mamata said altogether Rs 6,000 crore (which sources in Nabanna said was Rs 6,500 crore) had been lying unpaid by the Centre for the past six months and she had already taken up the matter with New Delhi.

“We are yet to receive Rs 6,000 crore from the Centre under the 100-day job guarantee scheme,” she said.

“The Centre is doing it deliberately and this is their dirty game. This is a political dirty game. We are number one in the 100-day work scheme, Banglar Awas Yojana and Gramin Sadak Yojana but no man-days have been created for this fiscal yet. The target under the housing scheme has not been set either,” said the chief minister.

She said all frontal organisations of the Trinamul Congress would launch a state-wide protest against the Modi government over the delay in the release of the funds.

“I will ask all our block leaders and frontal organisations to launch state-wide protests against the BJP and Prime Minister on June 5 and June 6. The two days’ protest will cover both rural areas and towns from the booth level. If the Centre continues such a political dirty game, we will take the protest to Delhi,” she said.

Sources said the Trinamul chairperson had her eyes set on next year’s panchayat polls when she attacked the BJP government for not releasing the funds under the job scheme.

“We will intensify our movement against the BJP over the issue of not releasing funds for several rural beneficiary schemes ahead of the panchayat polls,” a senior Trinamul leaders said.

The chief minister said the money belonged to states and the Centre was just sitting on it.

“The Centre collects money as tax from us. It is not their money but they are not giving it to us. I have written to the Centre on this matter several times and I will again write to them. But if they continue to be indifferent, we will take the protest to Delhi,” she said.

Mamata is set to address two political rallies in Purulia and Bankura over the next two days. She will also hold administrative review meetings in the two districts.

The two districts in the Jungle Mahal had been the strongholds of the BJP since the 2018 panchayat polls. The BJP performed “extraordinarily” well in the rural polls and subsequently in the 2019 general election. “The saffron brigade also bagged a sizable number of Assembly seats from the two districts in last year’s polls,” said a source.

Mamata thanked the people of Asansol for ensuring a “historic” victory for Trinamul in the recent Lok Sabha bypoll and civic polls. She said she would be visiting the districts in the region frequently.