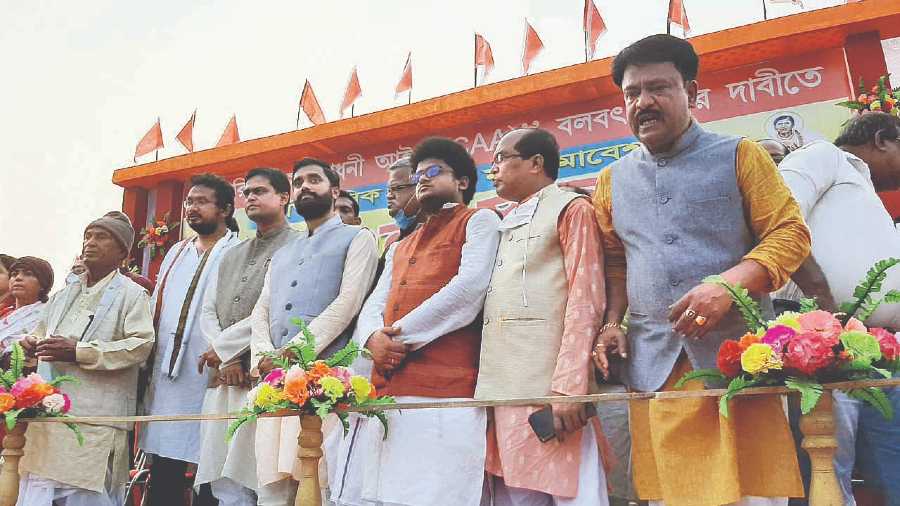 Bongaon MP Santanu Thakur (third from left, in light brown jacket), along with other leaders of the All India Matua Mahasangha at the in Bogula on Thursday.
Ranjit Sarkar
Subhasish Chaudhuri   |   Calcutta   |   Published 20.11.20, 02:25 AM

The All-India Matua Mahasangha, which enjoys the BJP’s support, has urged the Narendra Modi government to announce a timeframe to implement the provisions of the Citizenship Amendment Act (CAA), the request belying the community’s restlessness over its delay.

“We had taken up the issue with the government before... Now we are again contacting the Prime Minister’s Office,” said Santanu Thakur, the BJP MP of Bongaon.

The Matua Mahasangha raised the demand for implementation of the CAA as its leaders have been facing embarrassing questions from the community on whether the Act, billed by the saffron camp as a one-stop solution for citizenship issues faced by Hindu migrants from Bangladesh, would be implemented or stay on paper.

On Thursday, Bongaon MP Santanu, with his brother Subrata, held a meeting in Nadia’s Bogula to reassert the demand for the rollout of the Act before some 10,000 members of the Matua community.

Santanu earlier this year had written to home minister Amit Shah for an early implementation of the CAA.

What could further embarrass the BJP is the Matua Mahasangha’s decision to launch a pan-Bengal campaign for the implementation of CAA. The Mahasangha will hold over a dozen meetings in south and north Bengal districts covering some 10 Lok Sabha seats.

“The CAA was used as a major plank by the BJP to win over Matua voters in the 2019 Lok Sabha polls...the party won both the Bongaon and Ranaghat parliamentary seats (with a significant Matua population). Now, people want its implementation,” said an insider in the Mahasangha.

The Mahasangha’s move comes close on the heels of chief minister Mamata Banerjee’s recent outreach bids, such as the Matua Development Board with a grant of Rs 10 crore and pattas for Matuas to ensure their land rights, a move she said would eventually benefit 1.25 lakh families.

At the Mahasangha rally, Santanu said only the CAA could solve the problem of refugees. “Some people are misleading refugees by offering patta, but that can never ensure them citizenship. We want the Centre to take initiative to implement CAA fast,” he said.  “The delay has made people restless,” he added.

Mukutmani Adhikari, the Mahasangha’s Nadia south committee president, said a large number of community members are frustrated over the delay in implementing the CAA. “It has become tough for us to answer their questions on the issue. The promise to implement the CAA had helped the BJP win seats in Matua-dominated areas in the 2019 polls. The delay has embarrassed us. The Centre should announce when the process for implementation will happen.”

Adhikari added that it would be difficult to hold back the support base if the CAA is delayed “since political rivals can misinterpret and misguide the Matuas”.