March to save architectural heritage

A large crowd gathered outside Subodh Mallik Square on Wednesday, World Heritage Day, braving the afternoon heat, to take part in a march protesting the mindless and massive demolition of the city's architectural heritage. 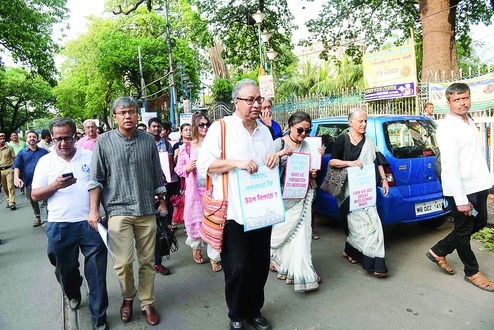 Calcutta: A large crowd gathered outside Subodh Mallik Square on Wednesday, World Heritage Day, braving the afternoon heat, to take part in a march protesting the mindless and massive demolition of the city's architectural heritage.

The march, organised by CAL, INTACH and PUBLIC, three organisations engaged in protecting the environment of the city, both built and natural, ended at the Calcutta Municipal Corporation (CMC) office, where the mayor, whom the protesters wanted to meet, remained invisible.

Writer Amit Chaudhuri read from the letter, signed by eminent citizens, that was to be submitted to the CMC. He started CAL (Calcutta Architectural Legacies) to talk about the city's architectural heritage, which is not necessarily about landmark buildings.

Participants held placards that said Calcutta should not turn into a city of malls; neither should its heritage be on sale.

Aparna Sen said that like people, an old city also has a face. If this face is struck at continuously, it becomes disfigured, unrecognisable.

• Documentation of buildings that require preservation

• Authentication of the incomplete heritage list that the city has and putting together a plan that will create heritage precincts, so that Calcutta's unique neighbourhoods do not disappear in the name of development.

"This is perhaps the first citizens' march on heritage in the city," Amit Chaudhuri said.

Many voices emerged, including those of other citizens' initiatives. Swarnali Chattopadhyay of Purono Kolkatar Golpo, a Facebook group with 40,000 followers, spoke about how the group's timely intervention has at least temporarily put a stop to the demolition of Metropolitan Institution, the school attended by Vidyasagar.

The march ended in an unexpected way. The protesters were stopped from meeting the mayor and the municipal commissioner inside the corporation building by the police, though the letter was accepted.