'How many human rights teams, tribal commission, women's commission teams have gone to the state?' 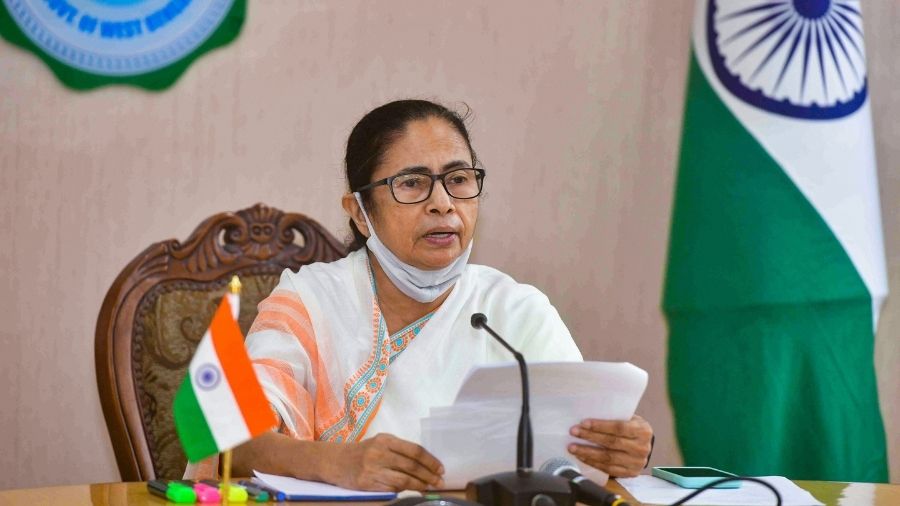 Asserting that the Trinamul Congress will overcome Opposition from the BJP and win the assembly elections in Tripura, Bengal Chief Minister Mamata Banerjee on Thursday warned of repercussions in Delhi if there are atrocities against TMC workers in the northeastern state.

At least 14 leaders and workers of the TMC, including those injured in an alleged attack by BJP workers, were arrested in Tripura's Khowai district on August 8 for "violating Covid norms".

Senior TMC leaders from Bengal are of late visiting the NE state where the Assembly election is due in 2023.

Claiming that around 2 lakh people owing allegiance to the BJP had come to Bengal from outside the state and even from abroad during the assembly election held earlier this year, Banerjee wondered why TMC leaders cannot go to Tripura which is ruled by the saffron party.

"We will certainly go and win the election in Tripura. The fight in Tripura will continue," Mamata, also the TMC supremo, said.

"If there are atrocities in Tripura, its repercussions will be felt in Delhi," she said without elaborating.

Mamata was talking to reporters after visiting injured TMC workers, who had been flown to Kolkata for treatment from Tripura, at a state-run hospital in Calcutta.

Accusing the BJP of running an anarchic government in the NE state, she claimed that the Biplab Deb dispensation does not allow any voice of opposition to it.

In a not so veiled threat of a tit for tat against the BJP, the chief minister said, "If they think that by registering an FIR, they will arrest them (TMC leaders) when they land there, they (BJP government) must remember that we also have the law in our hands here. We don't want to apply it and hope that charity begins at home."

The Tripura Police on Tuesday registered FIRs against TMC all India general secretary Abhishek Banerjee, minister Bratya Basu and other senior leaders of the party for allegedly preventing government servants from discharging their duties at Khowai police station on August 8.

Abhishek Banerjee, who is the Bengal CM's nephew and the de facto number 2 in the party, and others had gone to the police station to meet the apprehended TMC workers.

The TMC supremo said that state Education Minister Bratya Basu will go to Tripura on Friday.

The Tripura Police had also arrested some TMC workers from West Bengal on various charges. They were later granted bail by a district court in Tripura.

Claiming that the BJP government in the northeastern state was indulging in atrocities there, Mamata said, "I want to ask the (Union) Home Minister (Amit Shah) what is he going to do now? How many human rights teams, tribal commission, women's commission teams have gone there and how many cases have been filed in courts?"

A committee formed by the National Human Rights Commission on the instruction of the Calcutta High Court had visited Bengal last month to probe allegations of violations of human rights during post-poll violence in the state.

Those who went to talk to officials at the police station were arrested as if they are criminals while those who attacked TMC workers in Tripura are roaming freely, the chief minister claimed.

To a question on the Election Commission seeking views of political parties on holding assembly by-polls in Covid time, she said, "We will inform (the EC)".

Seven Assembly seats are lying vacant in Bengal due to the deaths of candidates or the resignation of MLAs.

A TMC parliamentary party delegation met the EC in Delhi last month to press for its demand for holding by-polls to the vacant assembly seats in the state at the earliest.

The TMC is keen on the by-elections as Banerjee, who lost the assembly election from Nandigram, will have to get elected within six months to continue as the chief minister. In that case, the by-polls must be conducted by November 5.

The by-elections are due in the constituencies of Khardah, Gosaba, Shantipur, Jangipur, Samserganj, Dinhata and Bhabanipur. Banerjee is expected to file nomination from Bhabanipur in Calcutta, which was vacated by winning TMC candidate Sobhandeb Chattopadhyay, days after the results were declared.

Mamata said that she will get a CT scan done of her leg which was injured during campaigning for the Bengal Assembly elections in March.

The chief minister also visited her ailing sister at the state-run hospital.