Elections can be held at 32% infection rate and not at one per cent, asks chief minister who needs to be elected to the Assembly by November 5 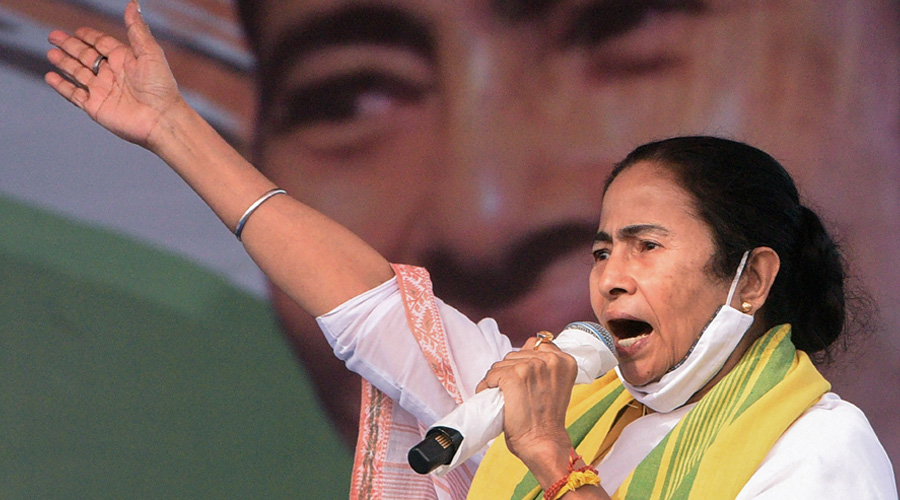 Chief minister Mamata Banerjee said on Wednesday that she would ask Prime Minister Narendra Modi to instruct the Election Commission to hold byelections in the Bengal soon, indicating that she was keen to complete the constitutional necessity of being elected to the state Assembly well before the six-month deadline given that the second wave of Covid cases was on the decline.

Mamata had lost to Suvendu Adhikary from Nandigram in the Assembly polls. Though the deadline for her re-election ends on November 5, Mamata is keen that byelections be held in Bengal immediately before the state is witness to what experts fear could be a third wave of the pandemic.

“We are waiting. We have heard the central poll panel is waiting for the Prime Minister’s nod,” Mamata said at the state administrative headquarters on Wednesday. “I will request the Prime Minister to give the go-ahead.”

Mamata said elections could be held within a span of seven days, keeping the pandemic in mind. “When the elections started (the first phase on March 27) we had a 2-3 per cent infection rate. By the eighth phase, the infection rate had climbed to 32 per cent. Elections can be held at 32 per cent and not at one per cent?” Mamata asked.

The chief minister had blamed the spike in Bengal’s Covid cases, which climbed to more than 20,000 a day in May, on the prolonged election schedule and packed campaign meetings.

Bypolls will have to be held in Bhowanipore, Khardah (the winning candidate Kajal Sinha died from Covid before the results were declared), Shantipur and Dinhata (where two BJP MPs contested and won but have resigned to retain their respective Lok Sabha seats). Elections were deferred in the seats of Shamsergunj and Jangipur following the deaths of two candidates before polling.

Trinamul veteran and state agriculture minister Sobhandeb Chattopadhyay, who had won from Bhowanipore, resigned as MLA on May 21 to make way for Mamata to contest from her old constituency. Chattopadhyay is expected to be fielded from Khardah.

While the outcome of the Bhowanipore polls holds zero doubt in the mind of the Trinamul top brass, unlike in Nandigram which was fiercely contested, a letter from state Congress president Adhir Chowdhury to interim Congress chief Sonia Gandhi has raised eyebrows. Earlier this month, he had opined that the Congress should not field a nominee against Mamata in Bhowanipore.

Sonia is yet to respond to Chowdhury’s request. But neither the Congress nor the Left have called off the alliance. The CPM, which admitted in its recent state committee meeting that the party had failed to give a strong anti-BJP message, is waiting to hear from its alliance partner. “We cannot give up the political space to the Trinamul and BJP. This is what both the parties would like. At the same time, we don’t want the alliance to be in jeopardy. We will wait for the Congress to announce its decision,” said a CPM state committee member.