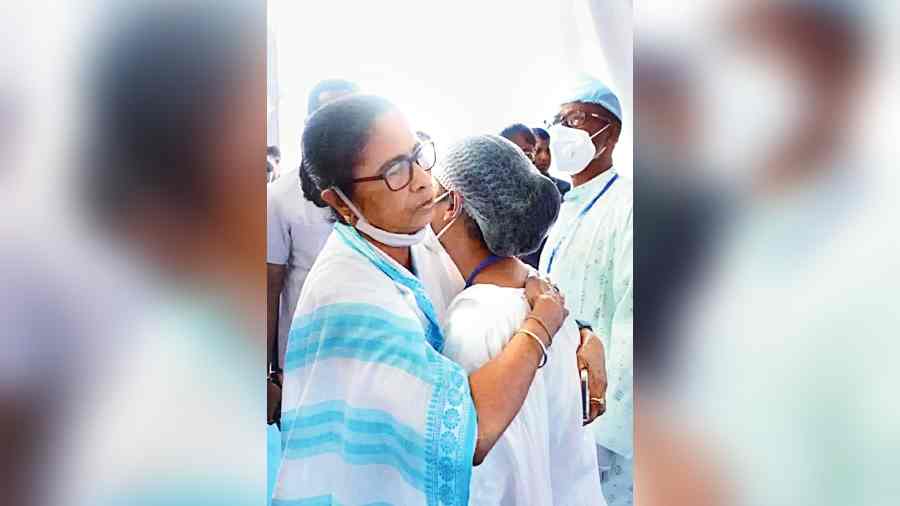 Mamata Banerjee on Monday tore into the BJP over the way it is running the country, demanding that the retirement age of soldiers recruited under the Agnipath scheme be raised to 60 years —  or even 65 years — to do away with the uncertain future they would otherwise face.

The chief minister, who ended her public silence on the raging controversy a week ago, on Monday sought answers from the BJP-led Centre on the controversial scheme, under which soldiers would be demobbed after four years without pension.

“My main aim is to create more and more jobs… unlike that of the BJP. They are going to train people for four to six months and recruit them for four years? What will the soldiers do after four years, sit jobless and have lollipops? What will then be their fate? It’s so uncertain,” Mamata said at a state government event in Burdwan on Monday afternoon.

The Trinamul chief had alleged on June 20 that Agnipath was essentially a scheme for the BJP to bring up a base of armed cadre for itself before the 2024 general election.

“Will their whole lives be sustained with what they make in four years? Where will these jobless boys and girls go after four years? We unequivocally demand that the retirement age be extended to 60. If need be, 65 years…. Nothing happens in four years. Four years is simply unacceptable,” said Mamata, adding that the generation of employment the Centre promised under the scheme was “a microscopic number” for India’s population.

Mamata also attacked the BJP for allegedly getting central probe agencies to hound political opponents and dissident voices. “This BJP, they are doing whatever they feel like…. They are misusing central agencies, the CBI, the ED, against whoever is speaking the truth,” said the chief minister, going on to cite the Sanjay Raut example.

“Today itself, I saw a Shiv Sena leader in Maharashtra being summoned by the ED,” she said, referring to Raut, a Rajya Sabha member of the Sena, loyal to Maharashtra chief minister Uddhav Thackeray, whose government the BJP has allegedly been trying to fell by backing dissidents.

Mamata has already thrown her weight firmly behind Team Thackeray, directly accusing the BJP of trying to topple another democratically elected government, calling it “unethical”, “unconstitutional” and “shocking”.

On Monday, referring to Raut, she asked: “Why will they (the BJP) torment the common man like this? Is this the way to run a democracy? Why will you rule by fear? Is this how a country is run?”

“Lakhs of people, businessmen, have left the country in the past few years. To escape this reign of terror,” she said. “No need to take my word for it. Examine data available with passport and visa offices.”