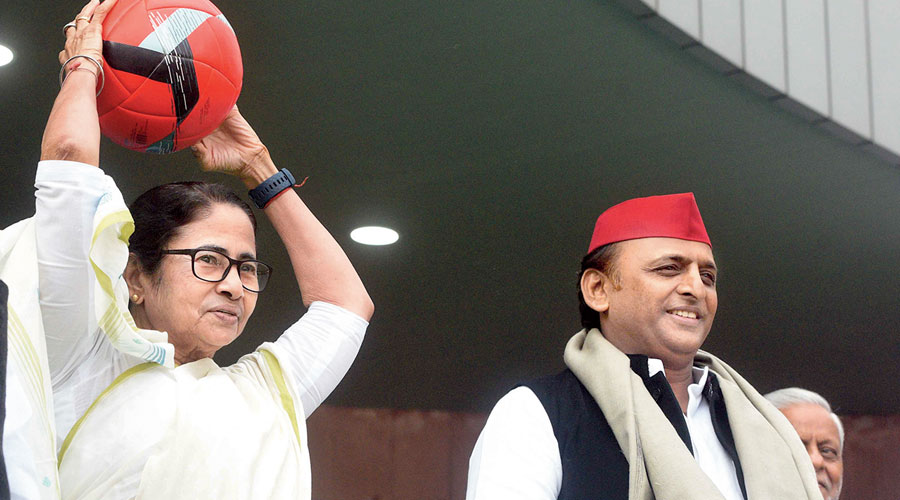 Mamata Banerjee on Tuesday launched a broadside against Uttar Pradesh chief minister Yogi Adityanath on his alleged failure during the second wave of Covid-19 and inability to ensure security of women in the state.

While addressing a press meet in Lucknow, along with Samajwadi Party chief Akhilesh Yadav, the Bengal chief minister vowed to remove the BJP from the country if the people of UP refused another term to Adityanath.

“You remove the Bharatiya Janata Party from UP and I promise I will remove them from the country,” said Mamata, dropping a hint of a big role she aspired to in national politics ahead of the 2024 Lok Sabha elections.

In her verbal fusillade against the BJP just two days before the first phase of the UP Assembly elections, the Trinamul Congress chairperson targeted Prime Minister Narendra Modi and Adityanath.

“He (Modi) says he gave you vaccine. He and his men are like Mogambo (a villain in Bollywood film Mr. India), Mogambo ko khush hone do (Let Mogambo be happy). But you ask them where did he get the money for vaccine? It was your income tax, GST, your money only,” she said.

Replying to a question — tossed at her at the news conference in the SP office here — on Modi’s speech in Parliament on Tuesday, she said: “Modi is father of Emergency; in fact he is grandfather of Emergency.”

The Prime Minister, who_ was scheduled to hold a rally in UP on Tuesday but later addressed it virtually, had said in Parliament earlier in the day: “Had the Congress not been there, then, there would have been no blot of Emergency.”

The thrust of Mamata’s anti-BJP narrative was the failure of the Adityanath government.

“They (the BJP) will try to intimidate you during polling but you don’t need to fear. Jo darta hai, wo marta hai. Jo ladta hai wo jeetata hai (One who fears would die. Those who fight will win),”she said.

Mamata rolled out a long list of her achievements as the chief minister of Bengal as she tried to highlight the failures of Adityanath, who was one of the star campaigners for the BJP in the Bengal polls, as an administrator.

“You had gone to Bengal (during 2021 Assembly elections) to defeat Mamata Banerjee,” Mamata said.

She recalled how the UP chief minister went from one district to another on choppers to campaign against her before asking him whether he performed his role as the chief minister of the most populous state in the country during the first two waves of the Covid- pandemic. “You didn’t care to defeat Covid in UP. Tender your apology. How many people did you dump in the Ganga? You didn’t give their family members a chance to see them. They are asking you today do you need their votes?” said Mamata.

Ahead of the first two phases of polling in the western UP dominated by Jats and Muslims on February 10 and 14, Mamata said: “Be it Hindus, Muslims, Sikhs, Christian, Dalit or Jats, they all suffered. And what did you (Adityanath) do? You put fire in water (threw bodies into river water). Didn’t you have firewood to cremate them? First you tender your apology and then ask for vote.”

She also thanked Jayant Chaudhary, Rashtriya Lok Dal (west UP based) president, for contesting the election in alliance with the SP and said it was a necessary step forward for the people of the state. _

Mamata repeatedly stressed that her brand of politics was different from that of the “communal politics” of the BJP as she believed in development.

“I don’t want to talk about Corona politics. I dislike communal politics, which is a fake politics of the BJP. They turn religion upside down. They don’t believe in true Hindu religion. I will talk about employment. If Akhileshji wins, UP and Bengal together can start many industrial units here. We can work together”, she said. The condition of women in UP in contrast to the “better deal” that she was offering to them featured extensively in her diatribe against Yogi as she recalled the Unnao and Hathras incidents, which took place in 2017 and 2020, respectively.

“You (the BJP) are destroying everything. I don’t need to remind you (the BJP) what you did to mothers and sisters. First, you tender your apology to the people and then ask for votes. What did you do in Hathras (a 19-year-old girl was gangraped and then her body was forcibly cremated)? History will never pardon you. Apologise first. What happened in Unnao (a 17-year old girl was raped and then set on fire)? Tender your apology.”

“How many people died during NRC (movement against the National Register of Citizens)? Tender your apology (Mafi mango),” she said.

Mamata also obliquely attacked Bahaujan Samaj Party president Mayawati as she tried to project Akhilesh as the undisputed leader of the less fortunate. “I want to tell the Dalits that their leader is not doing anything, they have surrendered before the BJP.”