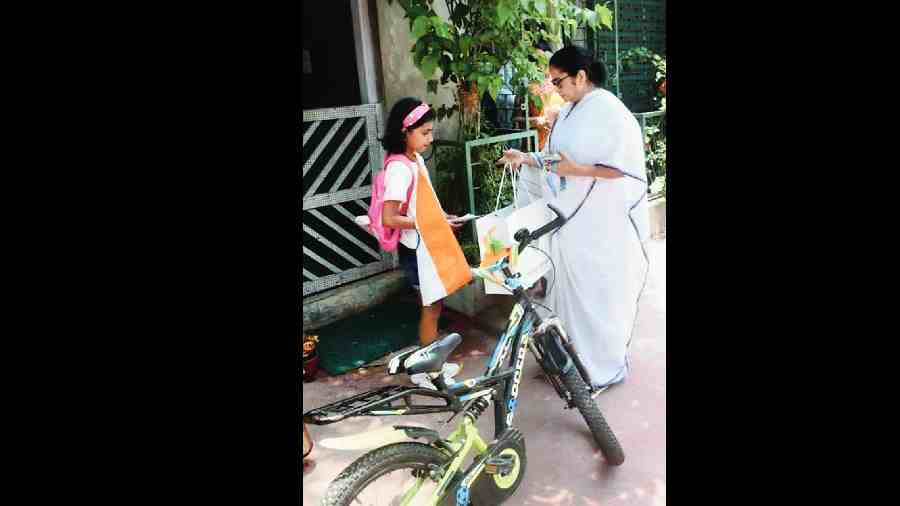 Sayantika Das, an eight-year-old girl from Malda, met chief minister Mamata Banerjee in  Calcutta on Thursday and thanked her for introducing welfare schemes for students of Bengal, especially girls.

The Class II student had planned to cycle some 350km from Malda to Calcutta to meet Mamata.

On learning this, Mamata instructed the Malda district administration to ask Sayantika to come by train, keeping in mind the risk of cycling on highways at her tender age.

Helped by the administration, the girl and her parents took Saraighat Express from Malda on Wednesday night.  She also carried her cycle. On Thursday, they reached  Howrah and were escorted to a resthouse by policemen.

Then, Sayantika cycled to the chief minister’s modest residence at Harish Chatterjee Road, which took her around 20 minutes. Her parents reached separately.

Sayantika told journalists later that Mamata had been very warm , arranged breakfast for them  and accepted the aamsatwa (mango candy) and the mango sapling that she had carried as gifts from Malda. “She encouraged me to continue with my studies,” Sayantika said, adding that she received books, chocolates and dolls from the chief minister.

Mamata shared pictures of this meeting on Twitter. “Pride of Bengal!” Mamata tweeted, adding how Sayantika and her sisters “benefitted from several GoWB flagship schemes like Kanyashree and Sabooj Sathi”.