On Monday, Chatterjee in Siliguri said the state could not be divided and that a permanent political solution did not mean a separate Gorkhaland 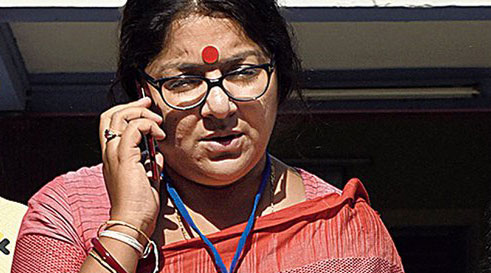 The state BJP leadership, which appears to be treading very cautiously on Gorkhaland before the upcoming Bengal Assembly polls, has exposed a contradiction within the party on this emotive issue.

State BJP leaders such as MP Locket Chatterjee, who recently toured north Bengal, publicly negated the formation of a separate state of Gorkhaland. On the other hand, the BJP’s Darjeeling MP Raju Bista recently requested the Parliament to note that the demand for Gorkhaland state was a “long-pending” one of the people of the region.

On Monday, Locket who was in Siliguri with Bengal state unit general secretary Sayantan Basu, said Bengal could not be divided and that a permanent political solution did not mean a separate state of Gorkhaland.

“Darjeeling is the crown of Bengal and it will continue to be so. A permanent solution for the hills does not mean the separate Gorkhaland state. People of Bengal have lived together for years and will be together in the days to come,” said Locket in Siliguri on Monday, here with Sayantan to drum up support for the farm bills.

A few days earlier Sayantan had commented on similar lines. “Gorkhaland is the issue. However, the BJP is never in favour of dividing the state. It will be seen if a permanent solution can be reached within the framework of the Constitution other than dividing Bengal. That process has been started. The state government has tortured the Gorkhas. It has to be rectified. Some state ministers should also be punished,” he had said.

The comments of these two state BJP leaders assumed significance at a time the BJP-ruled Centre changed the agenda of the October 7 tripartite from “issues related to Gorkhaland” to the Gorkhaland Territorial Administration.

But on September 19, Bista said he had requested the Centre to expedite the process of “ascertaining permanent political solution to fulfil the long pending demand” of the region. “I requested the Parliament to take cognisance of the fact that the demand for Gorkhaland state is a long-pending demand of the people from Darjeeling Hills, Terai, and Dooars,” Bista had stated.

A veteran in hill politics said these contradictions were confusing. “The Bengal BJP leaders are clearly ruling out division of the state, but the Darjeeling MP has a different narrative... This is really confusing,” the veteran said.

Another observer in the hills said that divergent opinions among BJP leaders was not new. “Any party eying the Bengal election can’t speak in favour of Gorkhaland. The statement of the BJP state leadership is nothing new. While they are trying to address their constituency in the rest of Bengal, Bista has to take care of his constituency (here),” he said. The observer added that the run-up to the Assembly polls would see divergent assertions as all political parties would try to create the “right perception” for their target audience.

Even the Gorkha Janmukti Morcha (Binay Tamang), aligned with Trinamul, has written to Prime Minister Narendra Modi in support of the Gorkhaland demand. However, Trinamul is against the division of Bengal.

Against this backdrop, Union home minister Amit Shah, who is scheduled to visit Siliguri on October 17, will be closely watched.

“It is likely that Amit Shah will remain silent on the issue of Gorkhaland... But he might just indulge in a jugglery of words. In this fight of creating a perception that a particular party is the real champion of our cause, regionalism is taking a beating,” said Amar Lama, speaking as an analyst and not as a leader of the Jana Andolan Party.

Unlike in previous polls, Lama said, the Assembly election in the hills this time was being manoeuvred by the BJP and TMC though they were propping local parties. “Regionalism had been kept alive by Subash Ghisingh and even Bimal Gurung to an extent. The same can’t be said for this election. We are of the opinion that all regional parties should come together and contest at least in the three hill Assembly seats to safeguard our issues.” He added that during Assembly polls, hill parties should stay equidistant from both the BJP and TMC.